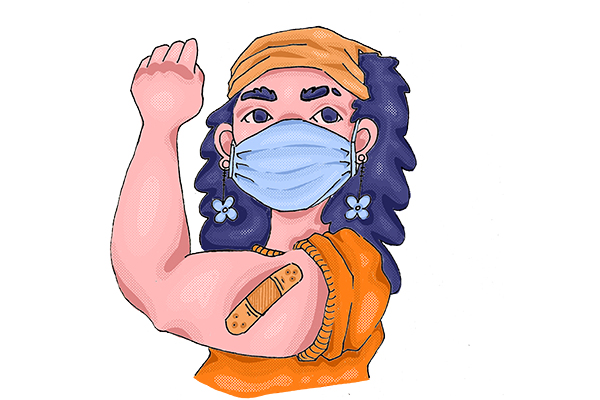 UT released its first doses of the Pfizer-BioNTech COVID-19 vaccine to members of the UT community last month and will continue the effort to vaccinate the UT population as new groups become eligible.

Last month, the University received 2,925 doses of the Pfizer-BioNTech COVID-19 vaccine to distribute to frontline health care workers. The University distributed all first round doses in December and is now working to distribute the second round of doses to 1A healthcare workers, said Jonathan Robb, director of the UT Office of Emergency Preparedness.

The 1A group includes health care workers, long-term care staff and EMS providers, according to the Texas Department of State Health Services website. The 1B group, which includes people 65 and older or 16 and older with underlying health conditions, will be the next group to receive vaccines, Robb said.

“We developed a great plan in collaboration between everybody,” Robb said. “Now we're getting close to the end of those second round doses, and are in a position that as soon as we get more allocation we can effectively move to that 1B population.”

Robb said the University must wait for the state to approve giving out doses to more populations. The University plans to build a sufficient supply of vaccines for those eligible in the 1B group next, Robb said.

Norman Nguyen, a pharmacy graduate student, said he received his first dose of the Pfizer vaccine on Dec. 17. Nguyen said he used the University Health Services online portal to schedule an appointment.

“There were a bunch of time slots available,” Nguyen said.” It was actually a lot more open than I was expecting.”

Although Nguyen said he felt sore after receiving the vaccine, he said by the third day his soreness was better. Nguyen said when he received his second dose on Jan. 7, his symptoms included fatigue, a slight fever and chills.

“Once I started getting those chills and really feeling the fatigue, I was like, ‘Okay, I need to sleep this off,’” Nguyen said. “I went to bed, put on some cold clothes, slept it off for the next eight hours and woke up the next morning … still just a slight fever because your body’s reacting to the vaccine, making those proteins and creating those antibodies.”

Terrance Hines, the executive director and chief medical officer for University Health Services, who also received the vaccine, said side effects occur with all types of vaccines, whether COVID-19 or influenza.

“The way that vaccines work really is by stimulating the immune system to create a response, in this case to create antibodies to the spikes,” Hines said. “I continue to believe strongly in the vaccine. Being uncomfortable for several hours was well worth it knowing in the end that I'm doing my part not only to protect myself, but to protect my community.”