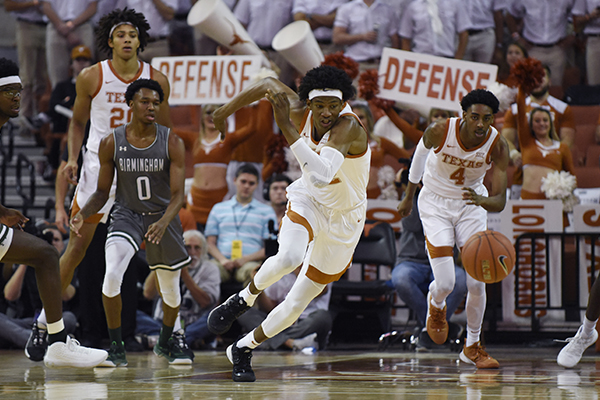 Heading into the college basketball season, there was a clear narrative for Texas: the Longhorns were returning every single player on last year’s squad and adding five-star recruit and freshman forward Greg Brown.

What preseason polls didn’t account for, however, is Kai Jones. Or, more accurately, they weren’t accounting for the sophomore big man’s massive improvement from his freshman year.

Head coach Shaka Smart said Jones has grown as much as any player he’s seen over the last calendar year.

“Last year, at the beginning of the year, he was literally our last man,” Smart said. “On this year’s team, he’s a guy who plays starter minutes and is in there when it really matters.”

Jones hasn’t just moved up Texas’s rotation. The sophomore has also vaulted up NBA draft boards due to his improved play in his sophomore season. Most recently, Jones was ranked as high as No. 10 in a mock draft from Bleacher Report’s Jonathan Wasserman. It’s a dramatic rise for the big man from the Bahamas, who started playing organized basketball at the age of 15.

Jones spent the previous offseason in Orlando, Florida, where he played high school ball. During the elongated break, he said he worked on his game with offensive efficiency in mind.

“Everyday in my mind I was working on catch-and-shoot threes, playing with confidence, finishing with people and just playing in transition,” Jones said.

The work paid off. Jones is shooting 7-of-16 from 3-point range, an impressive 43%, as well as 62% from the field and 70% from the free throw line. That shooting ability, combined with highlight dunks, an intriguing mix of athleticism and a lengthy 6-feet-11-inch, 218-pound frame, helped him become the most efficient offensive player for Texas this season.

“One thing about Kai (Jones), he has the best work ethic of any 6’11” player I have ever coached,” Smart said in 2019, during Jones’ freshman year.

But right now, despite his impressive offensive statistics, the sophomore still has room to grow on the court. He wants to improve his rebounding, defense and develop better decision-making in the flow of the half-court offense.

The good thing is that Jones has shown the ability to add to his game in a short amount of time. He did it his freshman year, going from the “last player” to earning significant minutes. He did it again during the offseason to become a lottery-projected draft prospect.

“His best basketball is so far ahead of him,” Smart said. “He’s one of those guys — we kind of felt this way about Jaxson (Hayes) when he was here — we’re going to look up and he’s 25, 26, doing some things that are just ridiculous. His ceiling is so high as a player. … He just has the ability to move his body a little differently than 99% of basketball players.”