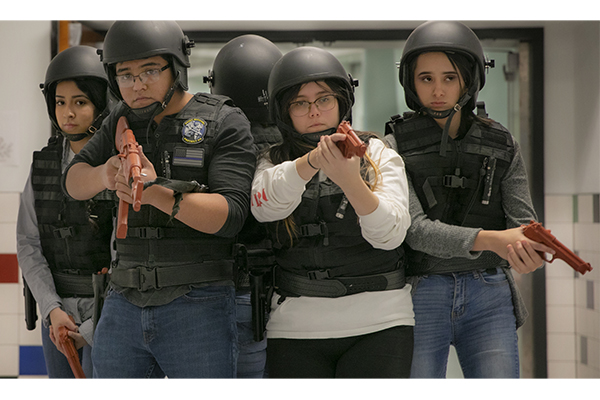 UT alumna Maisie Crow documented the journeys of three high school students in a criminal justice club that prepares them to join the United States Border Patrol and El Paso Police Department in her film “At the Ready.”

The documentary, which premiered at the Sundance Film Festival on Jan. 31, explores why the high school students from El Paso, Texas, want to pursue careers in law enforcement.

“When I met some of the students and I realized how complex their stories were and how difficult some of the decisions that they were going to have to make would be, I felt like it was a very important story to share with viewers,” Crow said.

Mason, a high school student who came out as transgender after filming, talks in the documentary about how the club at Horizon High School helped him feel like he was part of a family since his family does not support his sexuality. The club encouraged him to continue into the field, but ultimately he decided against a law enforcement career.

Crow explains in the documentary that in El Paso, law enforcement jobs offer some of the only wages in the city comparable to the national average, which was $67,700 in 2019, according to the U.S. Bureau of Labor Statistics.

Crow isn’t a new face in the world of socially conscious documentaries — last year, she created “Jackson,” a film about women’s reproductive rights. For “At the Ready,” she recruited multiple UT alumni to collaborate with her on the documentary.

“That’s what I love about graduating from the University of Texas,” Crow said. “No matter where I go, I end up running into someone else who went to UT.”

Carlos Corral, a radio-television-film alumnus and location sound mixer for “At The Ready,” was drawn to the film because he grew up in El Paso.

“When you’re from El Paso, there’s a really cool sense of pride here,” Corral said. “You’re always wanting the best for the people of the city.”

Crow said she directed the documentary using a fly-on-the-wall approach in order to not interfere with the lives of the subjects while filming “At the Ready.”

“You have to let the story tell itself,” Corral said. “And that’s always the biggest challenge (for me), especially because I’m from El Paso. You want to connect with the kids more. You want to talk to them.”

Nina Vizcarrondo, an alumna of the radio-television-film graduate program and editor of “At the Ready,” said she was impressed with the students featured in the documentary.

“The way that they experienced both their educational environment and their family environment, the pressures on them (about their career path) from both were so conflicting,” Vizcarrondo said. “I think they have been really successful and wise despite the pressure.”

Crow said she is thankful her film premiered at Sundance and is excited to see the discussions “At the Ready” will invoke about law enforcement and border patrol.

“Until we understand how diverse, how different, the community that we live in and that (is across the border) from us, we’re not going to … make any sort of change,” Crow said. “And I think that’s so necessary in this country right now.”