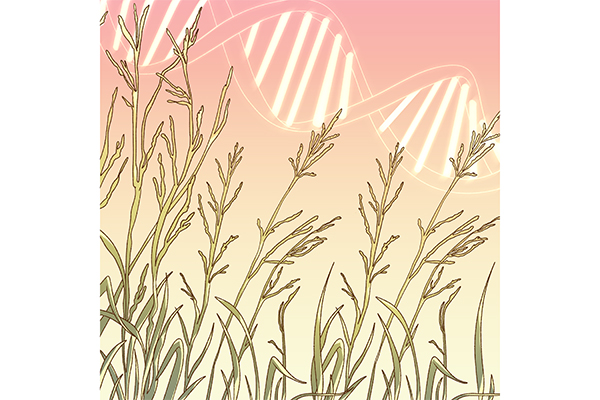 UT researchers published a Jan. 27 analysis on the DNA sequence of switchgrass, a plant which could be a promising, environmentally-friendly fuel source that does not emit carbon dioxide into the air.

UT collaborated with the U.S. Department of Energy and the Joint Genome Institute to study switchgrass, a deep rooted long-living grass that can be harvested multiple times before it dies, said Jason Bonnette, an integrative biology research associate. Because the plant is so large, it captures more carbon dioxide, preventing the gas from escaping into the atmosphere and contributing to global warming, he said.

Since switchgrass can grow as tall as 12 feet, it has the potential to be a large biofuel source, according to the study. Biofuel is a renewable carbon neutral fuel produced by a living organism, such as ethanol produced from corn, Bonnette said. Unlike fossil fuel, which has an excess amount of carbon because it comes from the ground, biofuel doesn’t add carbon into the atmosphere, Bonnette said.

According to the U.S. Department of Energy, the U.S. could produce between 84 and 97 billion gallons of biofuel by 2030, which would equal the country’s gasoline consumption in 2015.

To study the switchgrass DNA sequence, the team grew more than 1,000 clones of switchgrass samples in 16 different gardens with varied environments and climates throughout North America, Bonnette said.

“I have a whole team of people who, 365 days a year, care for these gardens, measure all these plants, conduct things, collect samples that may go back to all different institutions all over the country that look at different properties of these plants,” Bonnette said.

Associate researcher Alice MacQueen said to get genetically identical switchgrass, the team “clonally replicated,” or chopped them in half, since they can keep growing. MacQueen said scientists use these replications to study how one plant grows in different environments.

“We’ve made a bunch of predictions for what genetic variants confer adaptation in which … specific climates,” MacQueen said. “It’s not like we could grow all the switchgrass around Austin … it’s going to need to be grown in more areas."

“Plants have evolved to grow well in certain local environmental conditions, and a great way to study that is to take plant material and grow it, replicate it in many, many different environments and look at its performance,” Juenger said.

The release of carbon dioxide into the air is a contributing factor to climate change because the greenhouse gas creates a cover that can trap the sun’s heat energy in the atmosphere, warming the planet and oceans over time, according to the National Oceanic and Atmospheric Administration.

“Carbon dioxide has (gone) up considerably over the past 100 years alone since the Industrial Revolution started,” Bonnette said. “We’re going to have energy needs, and so the more neutral we can keep these energy needs, carbon-neutral progress can still occur, but we can cap or (mitigate) climate change by letting our activities not increase carbon dioxide content.”