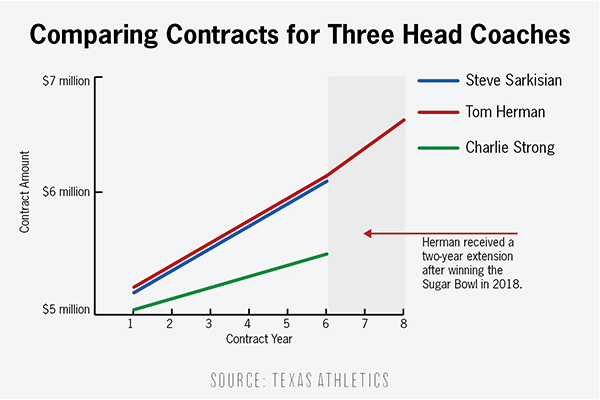 Just over a month after spending a whopping $24 million to buy former football head coach Tom Herman and his coaching staff out of their contracts, Texas is guaranteeing new head coach Steve Sarkisian a lucrative new agreement, according to a meeting agenda released by the UT System Board of Regents on Friday night.

Sarkisian, who spent the past two seasons as Alabama’s offensive coordinator and won the Broyles Award for the nation’s top assistant coach, is set to sign a six-year contract with $34.2 million in guaranteed money, according to the meeting agenda t. The first-year head coach is set to make $5.2 million in 2021 with an annual $200,000 raise. The contract is longer and guarantees more than the initial contracts of former Texas head coaches Tom Herman and Charlie Strong.

Joel Lulla, a lecturer at the Stan Richards School of Advertising and Public Relations, said the exorbitant amount of money is a direct result of the revenue the football program brings in.

“Clearly, it’s hard to justify a college football coach making $6 million a year in terms of what teachers make and what firemen make and what police make,” Lulla said. “But there’s a market for it, and The University of Texas football program is, as an approximate number, a $150 million-a-year business.”

While Sarkisian’s contract is longer with more guaranteed money than Herman or Strong’s, the annual salary will be less in Sarkisian’s first season at the helm than Herman made in 2020. Herman earned just over $5.8 million in his final season at Texas, which was revealed when UT Athletic Director Chris Del Conte announced his voluntary pay decrease due to COVID-19 in Sep. 2020.

Even though Steve Sarkisian himself is not making more money in 2021 than Tom Herman made in his final season at the helm, Sarkisian’s assistant coaches will be reeling in higher salaries than Herman’s. Herman only had one assistant coach, offensive coordinator Mike Yurchich, making over $1 million a year, according to the University of Texas Board of Regents approval in Feb. 2020.

While Lulla believes Texas paid the market price for Sarkisian, he said the supposed “pay cuts” that the Athletics Department asked nearly all of their coaches to take in 2020 were a farce. The 15% salary reduction Herman took before the 2020 season from his base salary of $3.5 million, which did not include the additional $2.5 million for media appearances, was paid back to him when  Texas bought out his contract, according to a joint investigation by the Austin American-Statesman and USA Today.

“From a distance, that seemed like a cynical optic’s ploy to say, ‘Oh, we’re in a pandemic, everyone’s sacrificing,’ when in fact the coaches weren’t sacrificing at all other than getting their salary deferred to end the end of their contract,” Lulla said.

For Texas, the ends justify the means. With multiple high-profile decommitments in the 2022 recruiting class and a restless fan base angered by mediocre results on the field, Texas Athletics risked hurting their bottom line once fans were likely allowed to return at full capacity in 2021, Lulla said. But history suggests the lengthy contract may not be the right move for Texas.

“The long-term contracts are always an issue because, frankly, they don’t really work out,” Lulla said. “Mack Brown was bought out, Charlie Strong was bought out of his last two years and Herman was bought out.”