Advertising professors dress up in funny, creative costumes to connect with students 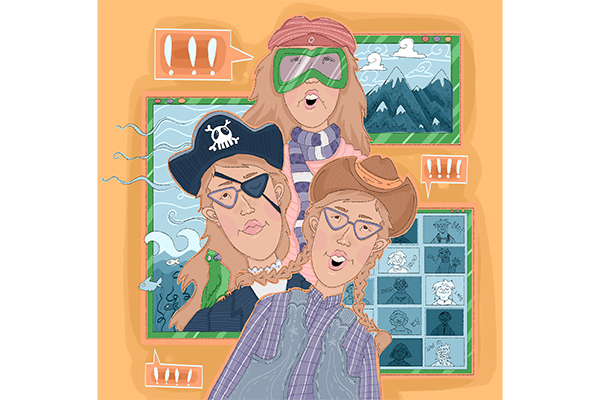 Logging on to weekly Zoom meetings to see the professor dressed as Rainbow Dash from “My Little Pony” would come as a shock to most students. But for advertising associate professor Lee Ann Kahlor’s students, it’s just a normal day of class.

“I look forward to the classes just to see what she’s going to be dressed as and how she's going to incorporate it into the lecture,” advertising sophomore David Elorreaga said. “I feel like it just brings the whole class together virtually since we can't really do anything in person.”

Kahlor pieces together costumes with what she finds laying around her house and dresses up with a new theme for every online lecture in her advertising research class. She’s appeared as a snow leopard, a farm girl and a pirate, just to name a few.

After recently adding Snapchat filters to her repertoire, Kahlor said the possibilities are endless, and she has material for the rest of the semester.

“It's a nice diversion for me,” Kahlor said. “This is now (my) second semester teaching online, and I teach in my bedroom and just spend all my time there. It just gets monotonous, and this gives me a little bit of spice.”

Her outfits are a big hit among her students, who Kahlor said “bust open the chat” every week.

“Most teachers were just putting the prerecorded lectures (on Canvas) with no visual interaction,” Elorreaga said. “So it was hard to get (through) them, and her interacting with (students on) those live (lectures) … made it more interesting and more intriguing to watch.”

Kahlor’s outfits are also popular with her five kids. She said they love to help her plan her costumes and gather around her laptop to watch students’ reactions during lectures.

Kahlor’s husband, advertising associate professor Dave Junker, has joined Kahlor in donning quirky accessories such as bright pink wigs and hats when he teaches his own classes. He has even played the hammered dulcimer, an instrument with strings stretched over a resonant sound board, and juggled for students.

Kahlor and Junker have even teamed up to prank their students. Once, Kahlor’s students logged into class to see Junker on their screen instead of Kahlor.

“When I turned on my camera, he was standing there and I was hidden behind him,” Kahlor said. “He was just moving his mouth, but my voice was coming out. We did that for five minutes, and they were just awestruck.”

While the main goal of their antics is to make online classes a little more enjoyable for students, both Kahlor and Junker said dressing up makes their days at home more exciting too.

“I miss seeing (the students),” Kahlor said. “I miss seeing them in a room and the warmth and the connection that exists. (But) I think we found a nice way to make this awesome even though we're not in person.”