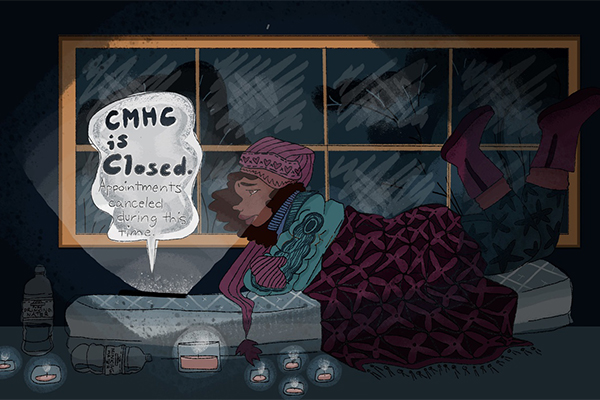 With a stack of candles beside her, Jenny Tran sat in bed, bundled up in jackets and sweatpants. For over 55 hours, Tran lived without power, heat, water and — most importantly — her therapist.

“I felt really isolated,” psychology freshman Tran said. “It was such a mess. I had a hard time sleeping, and with the cold and everything, it made it worse.”

Tran had an appointment with UT’s Counseling and Mental Health Center scheduled for Feb. 17. But when she checked her MyUHS portal the night before, she discovered a message saying her appointment had been canceled due to the winter storm.

During Tran’s first counseling session the week before, she told her therapist about some of her life experiences and struggles. Tran said she had hoped to elaborate on those feelings and receive an official diagnosis from her therapist during her second appointment.

“When I found out the appointment was canceled, it was like, ‘Oh man, that’s my last hope to make me feel not crazy,’” Tran said. “I felt like I had to deal with (everything) by myself.”

Other students also endured a stressful week without any mental health counseling.

Biochemistry junior Natalie Jimenez was supposed to meet with her therapist on Feb. 17. She said she expected the University closure meant her appointment would be canceled, but she was still upset when she found out.

“Therapy has been my guiding point to understand and accept the feelings that I have and understand why I'm feeling certain things,” Jimenez said. “It’s my rock. I’m pretty dependent on it.”

Marla Craig, the senior associate director for clinical services at CMHC, said appointments were canceled because of the University’s closure and many staff members’ lack of water and power. Although the University remained closed until Feb. 24, the CMHC resumed services on Feb. 22.

“We didn’t say, ‘Oh, we're closed, (and) we’re not going to reach out,’” Dr. Craig said. “We spent a lot of time trying to make sure the students at least knew the circumstance. We also included a lot of information on our website.”

After two days without power and water, Jimenez experienced an emotional trigger on the day she was supposed to meet with her therapist. She said she felt forced to compartmentalize her emotions so she could focus on surviving.

The CMHC crisis line, which students can call at any time and for any concern, remained open during the weeklong winter storm. But Craig said fewer students called during the storm than during an average week.

Jimenez said she might have called the crisis line if she knew it was available but said it wouldn’t have been as effective as talking with her therapist.