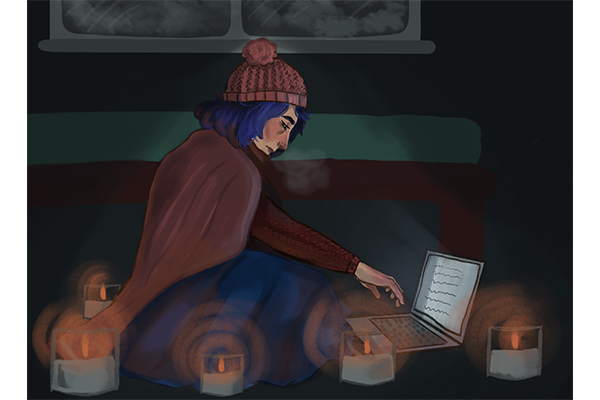 Snowed in at her parent's home in Marble Falls, Texas, Laura Benac spent a week huddled over her phone, worried about her friends in Austin. Ten days later, she logged in to Canvas and took an anthropology test just two hours after campus reopened.

“It’s been exhausting trying to come back after this,” said Benac, a communication and anthropology senior. “I shouldn't give myself a hard time if I get a bad grade on this because I know my personal state of being wasn't the best.”

From Feb. 14 to Feb. 24, winter storm Uri forced a campus closure and left millions of Texans without power and running water. UT President Jay Hartzell urged professors to put a pause on schoolwork, but some students felt their professors weren’t understanding of their situations.

While Benac’s anthropology test was originally scheduled for Feb. 15, her professor extended the exam window by 24 hours every time campus’ reopening was pushed back.

Benac’s professor, anthropology professor Ward Keeler, said he kept adjusting his course schedules and eventually decided to push back every assignment’s due date by one week.

“Of course, everybody's stress levels are higher because of the COVID pandemic (and they) skyrocketed because of the ice storm,” Keeler said. “I'm sure it's true I could have communicated the modifications (for the exam and class) better.”

The test ultimately took place Feb. 24, the day the University reopened. Benac said having to take a test immediately after returning from a crisis felt like a slap in the face.

“He never gave any alternate opportunities or addressed the fact that some people may still not have power or access to Canvas,” Benac said. “There was just an assumption that we would all be okay by (Feb. 24) in order to take the test.”

Keeler said students didn’t contact him about dealing with the continued impacts of the storm, and said he can’t respond to students who haven’t reached out to him.

Shagufta Shabbir, an organic chemistry assistant professor, said she communicates with students through email and during office hours about their situations, but has only had two students express their difficult personal situations since campus has reopened.

“I got an email from a student saying their computer broke down from water damage (from the storm), and they were having trouble completing the assignment,” Shabbir said. “My response was the assignment would not be considered for them.”

Shabbir said she adjusted her coursework and canceled one of her five scheduled exams.

Nutrition junior Ashley, who requested anonymity to avoid negative academic consequences, said it was still frustrating to return and be met with assignments in Shabbir’s class, compared to her other professors who had assigned no work last week.

“Our power and water went out for a couple of days,” Ashley said. “(There) was a lot of anxiety. We're trying to worry about surviving. Why am I (having) to worry about school?”

Shabbir said she feels students’ concerns about her being unaccommodating are valid, as she always gives students the benefit of the doubt.

“Some people might be in a worse situation than others,” Shabbir said. “I know some students of mine who still don't have water. I just hope that they don't lose faith or motivation (during) this time.”

Ashley said she didn’t get her Wi-Fi back until Feb. 23, the day before classes resumed. Once it returned, she said it was challenging to finish assignments while simultaneously recovering from the events of the past week.

“We're in the middle of a pandemic, and we experienced a snowstorm,” Ashley said. “This week was a lot for students. I know it’s traumatized people. I think lightening up the workload might be helpful.”