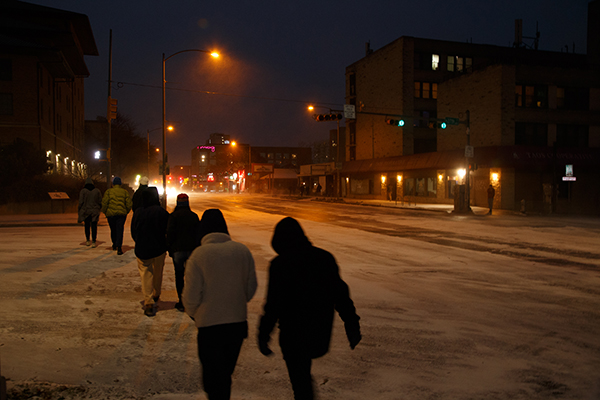 Editor’s Note: This story contains information about students’ experiences during the winter storm and may be difficult to read. At the bottom of this story, the Texan has linked to resources for students still in need. This story first appeared in The Daily Texan’s Feb. 23 print edition.

At 4 a.m. on Wednesday, government freshman Melina Olivas was woken up by the blaring of her apartment’s fire alarm. Olivas expected a false alarm, but when she opened her front door, water began rushing in from the hallway.

Olivas and her boyfriend took turns sweeping the water away from their front door until they couldn’t keep up. Eventually their apartment, St Johns West, was filled with over an inch of water.

“Everyone was so excited, like, ‘Oh, we got snow in Texas. This is gonna be amazing.’ And then suddenly, everybody doesn’t have power or water,” Olivas said.

In the aftermath of a winter storm that left millions of Texans without power in freezing temperatures, students now find their housing significantly affected. Some students’ housing flooded and others fled freezing homes to find shelter in emergency housing.

Olivas said the water leak came from a burst pipe on her floor. She said emergency services such as 911 and 311 were overwhelmed by similar concerns and couldn’t immediately assist them.

“We had to move everything really fast to get all our electronics and mattress and stuff up high,” Olivas said.

Olivas said her neighbor eventually vacuumed the water out, but not before it had already seeped into the walls. She said her building’s maintenance staff took out the damaged parts of her drywall Friday, leaving holes for the foreseeable future.

“It’s been really stressful,” Olivas said. “Finally all the water’s out, but now I have to deal with all this drywall all over my floor, and my couch is in the middle of the kitchen.”

Sofia Pineda, an economics and Middle Eastern studies sophomore, said water started dripping from her ceiling Wednesday at midnight. She said a water heater burst on the third floor of her apartment complex and leaked all the way down to her apartment on the first floor.

“I was freaking out,” Pineda said. “I called my mom before the management company because I didn’t know what to do, but then I called emergency maintenance.”

Pineda said maintenance told her to call 911, but the fire department said it could take up to 24 hours to clear the water. At this point, she said the water on her kitchen floor was so high it covered her shoes.

“Progressively, like, the whole ceiling started to rain on me,” Pineda said. “I had to get my dogs and anything electronic into my car and leave in the ice to my parents’ house because they live in Austin.”

When she went back to her apartment later in the week, she said everything she owned, from her clothes to her cherished school yearbooks, were soaked through.

“I didn’t believe it would get as bad as it did even though it was raining (down),” Pineda said. “You don’t think, ‘Oh, all my stuff’s about to get ruined.’”

After the power went out in his North Austin apartment, computer science junior Fazal Ali said he used a meat thermometer to test the indoor temperature. After 15 hours without power, the thermometer read 38 degrees.

“I realized that I had to get out of this place before I froze to death,” Ali said. “It was basically like survivor mode, and the only things I was worrying about (were) the essentials: water, food and shelter.”

Ali said he fled to the Texas Union, but he was worried about being exposed to COVID-19 due to a pre-existing condition that makes him more susceptible to the virus. He was supposed to get the second dose of the vaccine Wednesday, but it was delayed due to the inclement weather.

He said students at the Union tried to maintain social distancing, but he decided to play it safe and sleep in his car for several hours.

“My car was the saving grace because it had heat,” Ali said. “I could charge my phone, and worst comes to worst, I could sleep there. I had never been so grateful for my car before.”

Once he charged his phone, Ali said he was able to call his parents who live in India to let them know he was safe. He said he also reached out to his neighbors to offer them help.

“I am actually very proud of being in Texas at the moment,” Ali said. “I have never seen a whole community — a whole state — come together like this. … It’s incredibly good to see that even in the worst of times, people can be their best.”