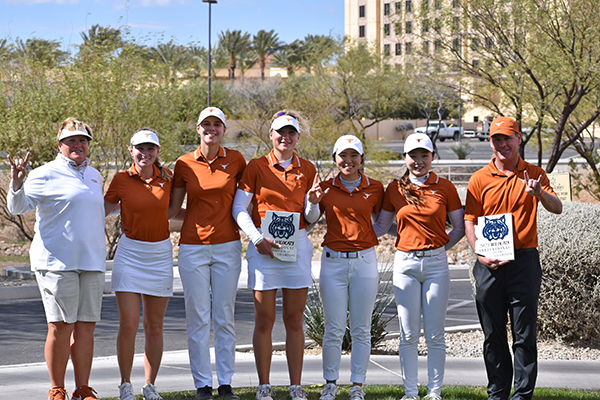 After struggling at the ICON Invitational two weeks ago, the Longhorns got back on track with a historic 25-stroke victory at the Wildcat Invitational in Tucson, Arizona on Tuesday. Their score of 28-under 836 marked the third lowest 54-hole score in program history.

Texas meant business as it jumped out to an early lead in the first 18 holes Monday, scoring 13-under 275 in the first round and tying the fifth-best 18-hole score in program history. It was also the first time in school history the Longhorns had multiple rounds at 13-under or better in the same tournament.

Fresh off a low-ameauter ranking finish at the U.S. Women’s Open in December, senior Kaitlyn Papp led the Longhorns on Monday and the leaderboard with a 6-under 66 score in the first round, the second-best round of her collegiate career. Papp would follow up with a 1-under 73 round Tuesday.

The Longhorns entered the final round Tuesday with an eight-shot lead at 14-under 562 behind standout performances from Papp, junior Sarah Kouskova, freshman Ashley Park and senior Agathe Laisne.

Kouskova and Laisne both rejoined the team this spring after missing the fall season due to the pandemic, but it didn’t stop them from powering Texas to victory in the meet. Kouskova took top honors by shooting 10-under par in her first collegiate tournament win, topping the leaderboard 68-70-68 in her three rounds. She posted five birdies and one bogey to cap off her performance.

However, Kouskova was not the only one with a top-10 finish. Laisne had a historic round herself, scoring a career-best 6-under 66 and tied for second place after a late surge in the third round. She made eight birdies on Tuesday and finished at 7-under par.

Rounding out Texas’ lineup was Park, Papp and sophomore Sophie Guo. Park placed fifth place at 5-under par, and Papp followed up with a tie for sixth place in her first tournament of the spring. Guo would finish tied for 36th with a score of 8-over par.

In their quest for their fourth straight Big 12 championship, the Longhorns will return to the course at the Mountain View Collegiate on March 19-21 in Tucson, Arizona. Due to the ongoing pandemic, live results will be available at golfstat.com.