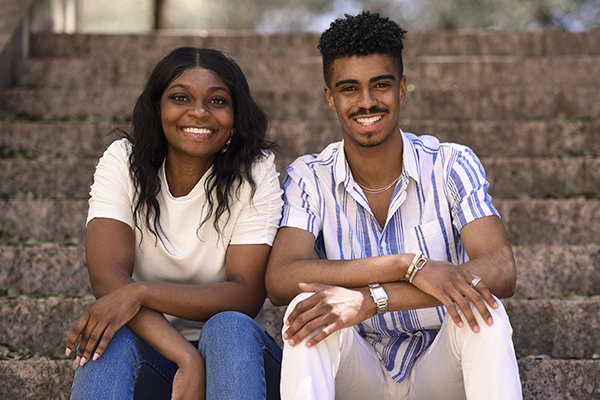 Legislative student organizations, which include Student Government, UT Senate of College Council and the Graduate Student Assembly, announced their representatives for the 2021-2022 academic year Thursday and Friday.

Students cast a total of 3,191 votes in campuswide elections. This was the first time the election was held completely virtually.

The vote to amend the SG constitution to establish an international student representative passed with an overwhelming majority.

Government junior Kabbara and Jones, a business honors and public relations junior, said they want to work toward unity on campus.

“The biggest issue facing UT is the lack of a peacemaking mindset,” Jones said. “This is a really divided community, and a portion of our platform is to build a bridge between these communities and have this peacemaking conversation as a whole.”

The executive alliance said they already have people supporting them in their initiatives.

“In order … to make something happen, you have to have people on board with you that believe in your vision just as much as you,” Kabbara said. “Me and Ethan have been blessed to be in so many spaces (and) so many communities that we have connections everywhere.”

Ding, a management information systems and urban studies junior, and Muñoz, an English, government, and youth and community studies junior, both originally ran as presidential candidates. Muñoz was given the opportunity to run for vice president after a council vote established Ding as president. Muñoz then ran against government sophomore Leland Murphy for vice president. Muñoz won through tiebreak from current Senate president Alcess Nonot, a human development and family science and biology senior, after neither candidate received a majority.

Ding emphasized that the next academic year is a tuition-setting year, when the University will establish tuition for the following two years.

“As president, it's incredibly important that we begin this process early with other councils and admin, so (we avoid) what happened two years ago where tuition increased on us without any of our input,” Ding said.

Muñoz emphasized that she wants to provide student organizers who are already uplifting the voices of marginalized groups a place to talk with administrators to make a change at the University.

“I see the struggles of marginalized students on campus,” Muñoz said. “I do not intend to be a person that is like, ‘(I) know what students go through,’ but instead, I want to be that platform that alleviates the lived experiences of students on campus.”

University Co-op board of directors: Collin McCabe and Michael Hansen

Correction: A previous version of this story misspelled a source's name. The Texan regrets this error.