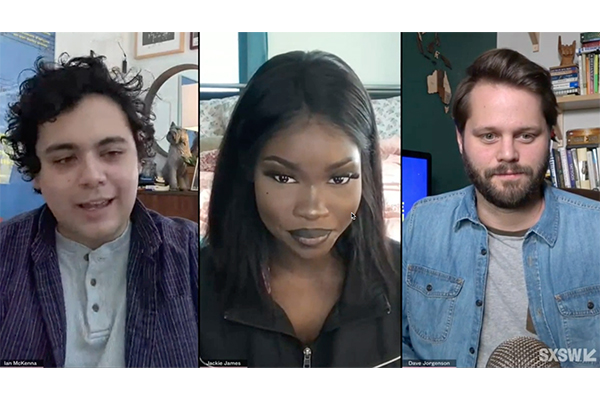 TikTok creators, Dave Jorgenson, Ian McKenna and Jackie James talked about making news engaging in their South by Southwest 2021 conference session. During the session, each creator picked out a TikTok they enjoyed from one of the other creators on the panel to discuss.

He said as a newspaper’s account, he tries to make his videos informative, but relevant by using trends such as the “tell me something without telling me,” trend he used in the TikTok about the wage gap.

“It almost strikes you more if you say less in a TikTok,” Jorgenson said. “(The Washington Post) being a stodgy newspaper, sometimes it's hard to get those things through, but because I approached it from a fact based (angle), we were effectively able to put it out there.”

Jorgenson also talked about McKenna’s TikTok on the @NowThisPolitics account where he showed a clip of Kayleigh McEnany denying Hillary Clinton’s concession of the 2016 election and then a clip of Clinton’s concession. McKenna said he made the short video to show facts without adding partisan commentary.

“It pretty saliently exposes that lie without getting partisan,” McKenna said. “I try to approach NowThisPolitics as a venue for accountability.”

James, @fatraco0n on TikTok, said she took to the platform as a creative outlet after the pandemic shut down school in March 2020. After the murder of George Floyd, she said she started talking about racial inequality and using the the duet feature to share informative TikToks to her 2.7 million followers.

“It's a lot easier to learn about something than to experience it,” James said. “The best way to approach a situation is by uplifting the voices of the people who have been put through this hardship.”

James, a 17 year old, said the Generation Z audience values authenticity. She said she engages her audience by making the news digestible and entertaining using short clips to encourage conversation about the news.

“To most people politics seems like a very intense and long topic to talk about, so being able to make small clips and pack a bunch of facts and a bunch of education like what you would see on a regular news outlet into 60 seconds is (the) trick,” James said.

Jorgenson said he talked to 12 different creators for his book, “Make a TikTok Everyday,” which comes out in June of this year. He said in interviewing creators in different genres, he learned that they have specific niches where they form relationships with their audiences.

“That is genuinely wholesome in the sense that (creators) really want to help people and they really want to connect with people more so than anything else on the internet,” Jorgenson said.