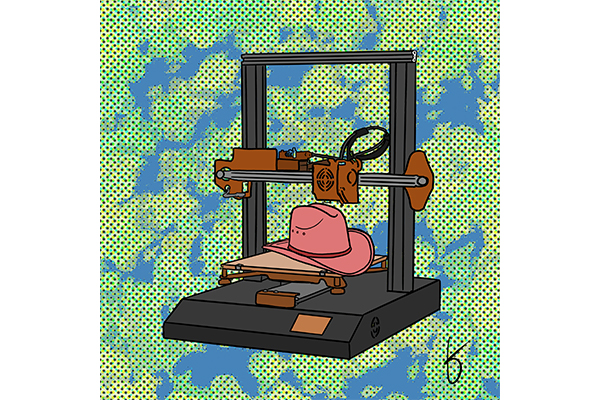 Editor's Note: This article first appeared in the March 23 issue of The Daily Texan.

The Cockrell School of Engineering opened a new center to focus on advancing additive manufacturing, also known as 3D printing.

Additive manufacturing is the process of constructing complex parts one layer at a time using a variety of machines and techniques such as selective laser sintering and PolyJet, said Jared Allison, operations manager for the new center. Center director Carolyn Seepersad said the 3,000-square-foot Center for Additive Manufacturing and Design Innovation includes $1.5 million of equipment to help print parts for different industries, such as aeronautics, defense or oil and gas exploration.

“One of our machines, for example, is called a digital anatomy printer, and it can print parts such as a heart or bone that (have) the same mechanical properties of an actual heart or an actual human bone,” Seepersad said. “You can use these parts for things like surgical planning because it replaces cadaver parts, so they’re faster and less expensive to access.”

Seepersad said additive manufacturing is much faster compared to conventional manufacturing, which uses more material and is less capable of creating complex structures.

“Because the parts are quite complex, you can get lots of functionality out of them that you otherwise wouldn't be able to,” Seepersad said. “You can do really complicated honeycomb structures inside your part that could help absorb energy or make it lightweight. You'll see aerospace companies using additive manufacturing to lightweight some of their components.”

Seepersad said the idea for the center was a decision made by nine Cockrell faculty members, including her and Tehrani. She said their goal is to accelerate the adoption of additive manufacturing and apply it to important challenges today.

Allison said the University has another facility called Texas Inventionworks, where undergraduate students can access different equipment for 3D printing. The new center provides the University with higher-end equipment, similar to those used in industries such as aerospace, which faculty could use for their own research.

“Texas Inventionworks is very inward facing in that it’s a lot of training (for) the students we have at UT,” Allison said. “The goal of the (new) center is to bridge that gap and allow people in the Cockrell School to be able to access these industry-quality machines to be able to actually manufacture parts if they need them.”

Allison said he is working to make sure all the machines in the center are working properly and those in the center have completed the necessary training. Once the center gets past this preparation stage, they will start making parts for research, he said.

Tehrani said each faculty member in the center will bring their knowledge of additive manufacturing to new projects and help the industry grow this field.

“You interact with other faculty, students, postdocs, everyone who's in the center to do projects that are more impactful,” Tehrani said. “We come together and use that to tackle a problem that we couldn't tackle (before).”