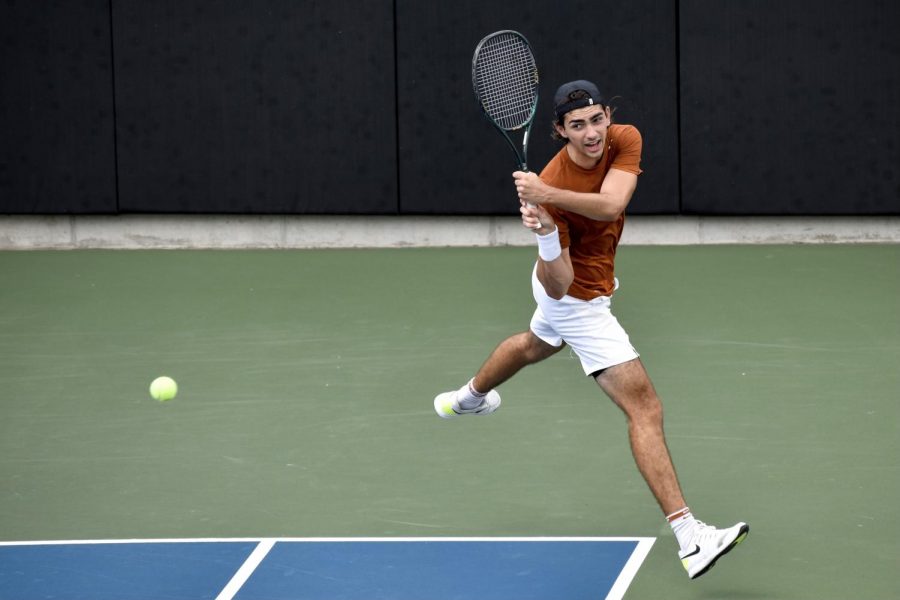 Until Saturday, every time No. 7 Texas has been involved in a tied 3-3 match this season, they have found a way to win.

With the entire dual match against No. 8 TCU riding on a third-set tiebreaker at No. 1 singles, it seemed as if the Longhorns were poised for yet another thrilling comeback at the Texas Tennis Center.

But No. 18-ranked TCU sophomore Luc Fomba dashed any hopes of another Texas miracle, trouncing No. 23-ranked sophomore Eliot Spizzirri in the decisive tiebreaker to lift TCU over Texas 4-3. Saturday’s loss snapped a seven-game Longhorn win streak and marked their first defeat since losing to then-No. 10 Tennessee at the ITA Indoor Championships on Feb. 14.

Spizzirri claimed the first set over Fomba at No. 1 singles after a tiebreak victory of his own. The sophomore jumped out to a 3-1 lead in the second set, but Fomba went on a 5-0 run to force a third set. Fomba then went on to clinch the overall match for the Horned Frogs via that third-set tiebreak victory.

Sophomore Cleeve Harper got his second-straight win over a ranked opponent at No. 4, with a solid 6-4, 6-2 win over No. 99-ranked TCU freshman Jake Fearnley. Sophomore Siem Woldeab, who shares the No. 99 spot with Fearnley, also picked up his second-straight ranked win playing at No. 3, beating No. 47-ranked TCU sophomore Sander Jong 3-6, 6-2, 6-3.

At No. 5, junior Chih Chi Huang returned to form, winning tiebreakers in straight sets to defeat freshman Tadeas Paroulek 7-6, 7-6. However, Spizzirri’s aforementioned loss at No. 1, as well losses from No. 16-ranked freshman Micah Braswell at No. 2 and sophomore Evin McDonald at No. 6, sealed Texas’ fate.

Texas had a lot of work to make up in singles after ceding the doubles point to TCU. No. 12-ranked Texas pairing Spizzirri and Woldeab dropped their match at No. 1, 6-4, to the No. 11-ranked doubles pair of Fomba and TCU junior Alastair Gray. A loss at No. 3 for Braswell and sophomore Jacob Bullard clinched the decisive doubles point for the Horned Frogs.

The loss to TCU was a disappointing start to Big 12 conference play for the Longhorns, but they look to make up for the loss against No. 20 Oklahoma at the Texas Tennis Center on Friday.