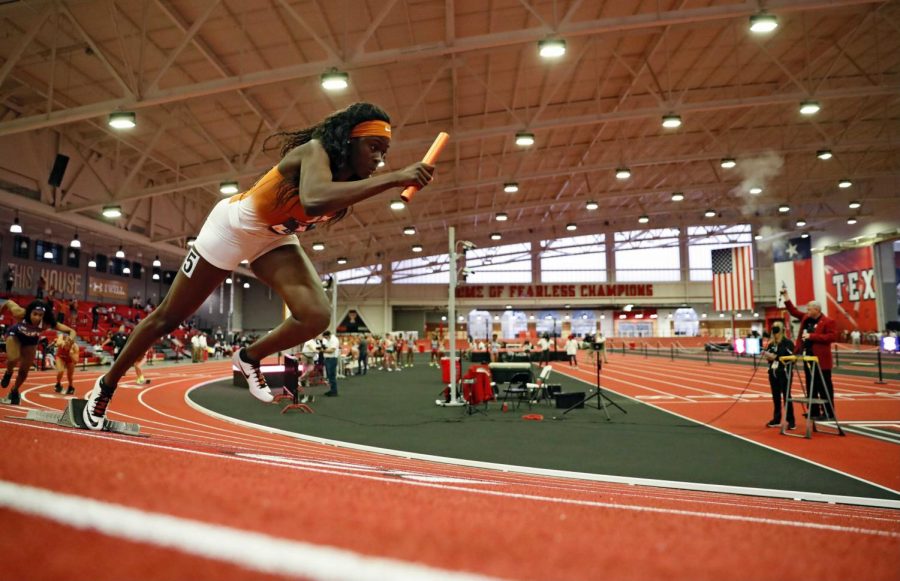 It took less than a minute and just 400 meters of all-out effort for Texas freshman Rhasidat Adeleke to entrench her name in Longhorn lore at the 2021 Big 12 Indoor Championships on Feb. 27.

The 18-year-old ran like a gazelle, gracefully floating around the curve of the track despite standing at six feet tall and competing in arguably the most physically demanding race. When the first-generation college student from Ireland checked her social media accounts after the race, she found out why her sixth-place finish had triggered such an uproar.

Adeleke recorded a 53 minute, 44 second time in the 400-meter dash, –– a race she had never run before this season –– breaking the Irish junior 400-meter indoor record in Texas.

Since that performance, Adeleke has continued to turn heads in her first collegiate season. Adeleke broke the Irish junior 200-meter record that stood for 21 years at the Clyde Littlefield Texas Relays on March 27, and then broke it again one week later with a time of 23.25 seconds at the team’s dual meet against Texas A&M on Saturday.

Adeleke, however, knows that she would not have the opportunity to break records at The University of Texas without the extensive sacrifices of her mother, Ade.

In Ireland, Rhasidat said Ade was her personal taxi driver and her monetary provider who funded her competitive drive. Rhasidat has raced in 14 different countries for the Irish junior team and recalls her mom traveling to countries like Azerbaijan just to watch her daughter race for 30 seconds.

“My family is literally my support system,” Rhasidat said. “My mom especially will go above and beyond to make sure I achieve my goals. (In) different corners of the world, she will be there.”

But in the current COVID-19 climate of travel bans and social distancing protocols, Rhasidat said her mother cannot be there in person to witness her hard work coming to fruition.

From an ocean away, Ade said she is proud of her daughter’s record-breaking accomplishments in her first collegiate track season.

Sophie O’Sullivan, an Irish citizen who resides in Australia and runs for the University of Washington, competed alongside Rhasidat on the same Irish junior team.

O’Sullivan said running track has allowed her and Rhasidat to see the world. Competing in countries like Hungary, where the pair first met at the European Under-18 Track and Field Championships in 2018, creates opportunities for Irish women to appreciate the world more, O’Sullivan said in an email.

Rhasidat said she is not entirely certain at this point in her young collegiate career which events she wants to specialize in. One thing she is sure about, however, is her dream to compete in the Olympics for Ireland as a Texas Longhorn.

Rhasidat said she has immense trust in head coach Edrick Floréal and believes training underneath him and among some of the world’s best sprinters will ultimately lead her to the Olympic Games.

“I put all my trust in (Coach) Flo,” Rhasidat said. “I’ll just be really grateful to be able to go out there and wear the Irish vest, while also throwing the horns up because, regardless, (I’m a) Longhorn for life.”

Editor’s Note: This article first appeared in the April 6 issue of The Daily Texan.