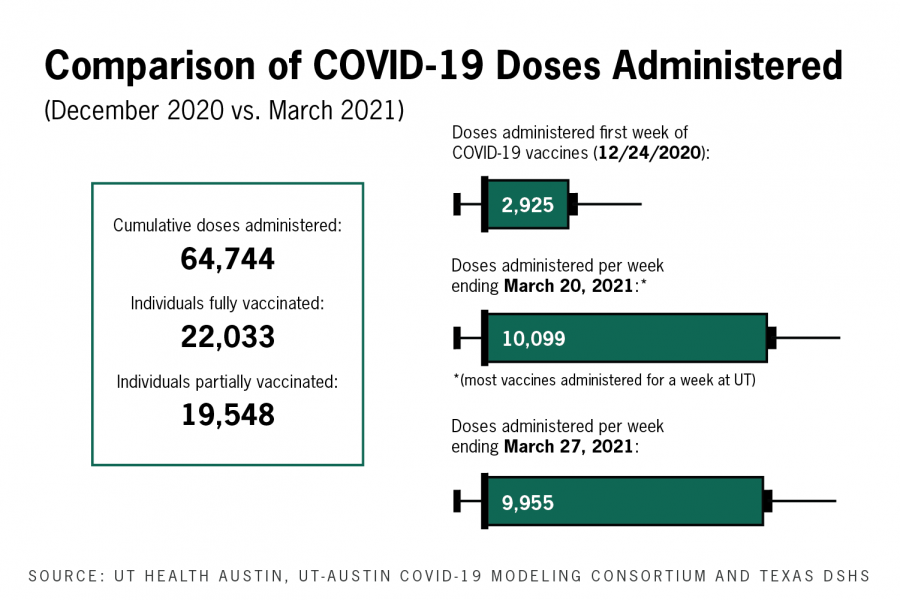 Editor’s Note: This article first appeared in the April 2 issue of The Daily Texan.

UT began administering COVID-19 vaccines to all Texas adults on Monday in accordance with new state guidelines, but is still prioritizing Texans that were eligible under previous vaccination phases, said Jonathan Robb, director of the Office of Emergency Preparedness.

Even though eligibility has opened to all adults, individuals in vaccine distribution phases 1A, 1B and 1C still need their vaccine, Robb said.

Robb said UT will still prioritize these predetermined groups in giving out appointments, and hopes they will vaccinate them in the next four to six weeks.

“We’re getting to a point, both at the federal and state level, where we’re getting more allocations,” Robb said.

According to the UT-Austin COVID-19 Dashboard, approximately 10,000 doses were administered in each of the past two weeks. Robb said he expects distribution to remain at these levels moving forward.

Approximately 340,000 people have pre-registered to receive the vaccine from the University, Veronica Trevino, media manager for Financial and Administrative Services, said in an email.

Max Carriker, a Plan II and mechanical engineering freshman, said he is not a part of a prioritized group and received his first dose on Wednesday.

Phase 1A and 1B, which opened vaccinations to medical responders, people over 65 years of age and adults over 16 with medical conditions, began in December, according to the Texas Department of State Health Services. Phase 1C, which includes people who are 50 to 64 year olds, started on March 15.

Carriker said he thinks taking the vaccine is a civic duty similar to voting.

“It’s more of a profound, meaningful activity, almost like voting in last year’s general election,” Carriker said. “It’s such a huge issue, and it’s almost the most important thing you can do.”

Even though the single-shot Johnson & Johnson COVID-19 vaccine was approved by the U.S. Food and Drug Administration in late February, Robb said UT Health Austin has received mostly Pfizer and some Moderna vaccines — both of which require two shots.

“With the Johnson & Johnson (vaccine), you only have to use refrigerated storage, so it’s a little easier to transport and handle,” Robb said. “They’re sending those to rural areas that don’t have the ultra cold storage like we do.”

“We asked the state to pause new allocations for this week, because we need to catch up after (Winter Storm Uri) and make sure to use the allocations we already have,” Trevino said.

Robb said UT received a large number of second doses this past week because no doses were administered during the winter storm. After the winter storm, he said UT doubled their vaccination appointments to catch up with the gap the storm produced.

This past week, UT administered second doses for people who received their vaccine after the storm in addition to regular first doses, he said.

UT is also vaccinating people on Saturdays for the next two weeks to use up all the allocated doses, Trevino said.