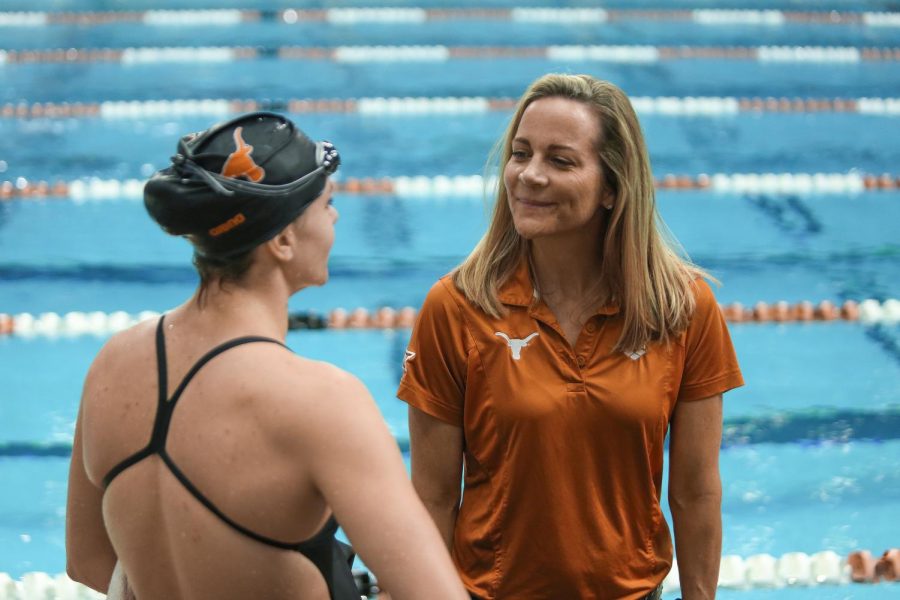 Carol Capitani has a specific word to describe her team over the past year: resilient.

As the Texas women’s swimming and diving head coach, Capitani knows firsthand the 2020-2021 season was anything but ordinary for the Longhorns.

The COVID-19 pandemic prevented the team from participating in most of their usual meets. Often, Texas would compete in time trials by themselves.

Even then, players lost time due to quarantine, according to Capitani. She said the season was a really rough time as the athletes would go from team building and daily training to isolation.

“Our team was just really resilient,” Capitani said. “A lot of times we were just swimming with ourselves (at meets), which is almost like normal practice.”

Despite facing countless challenges due to COVID-19, Capitani led the Longhorns to a third-place finish in the NCAA Championship meet, which marked the best showing by a Texas team since 2001.

This year more than ever, swimming provided an outlet for socializing and competing in a world of social distancing, Capitani said.

The Longhorns fostered a community among themselves this season. The team found ways to keep things light-hearted by earning stickers to put on the walls of the locker room when accomplishing certain swimming feats, such as achieving the best time in Texas, or receiving individual dog tags when reaching certain time goals.

“Most of the world couldn’t go anywhere (due to the pandemic), and they have the opportunity to get out and train with their best friends,” Capitani said. “I think it was kind of a blessing and a great opportunity for them. Training was very therapeutic for them during this time.”

Eight of the 24 members in the Texas program this year were freshmen, and the newcomers handled an already daunting transition to collegiate competition in the face of a pandemic. Moreover, the freshmen had to adjust their mindset from the individual focus perpetuated on high school club teams to a team-oriented attitude that is necessary for winning national titles in college.

“Sometimes the atmosphere and the environment of a college team trumps almost any club team, because you’re really working towards something pretty special with your best friends,” Capitani said.

While the season didn’t live up to the expectations that the freshmen had for their first year of college, they remained competitive and hungry in the face of high pressure at the championship meets.

A select few of them, such as freshmen Olivia Bray and Emma Sticklen, even had their first taste of national success. Bray received All-American honors at the NCAA Championships for her efforts in four events, including a runner-up effort in the 200-yard butterfly, and Sticklen earned the same for a seventh-place finish in the 200 fly.

“This season, the time together after a hard year was the reward itself,” Capitani said.

Editor’s Note: This article first appeared in the April 9 issue of The Daily Texan.