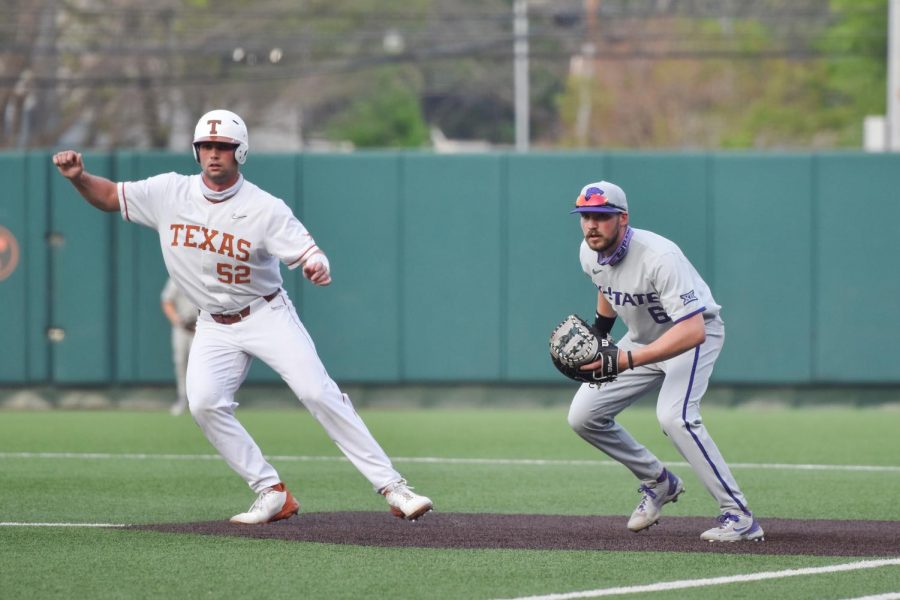 In a tied ballgame with the bases loaded in the bottom of the eighth inning, redshirt junior infielder Zach Zubia stepped up to the plate. But instead of swinging for the fences, Zubia just didn’t swing at all, drawing a walk that gave the Longhorns a one-run advantage.

The Texas baseball team finished the inning with eight runs total to secure the series-opening victory against Kansas State in a hard-fought 13-6 contest on Friday.

“I think there (were) 29 scouts in the stadium today,” head coach David Pierce said. “It was supposed to be a pitcher’s duel. That’s the beauty of baseball — you never really know.”

The Texas offense came alive after having won previous games with patience and walks at the plate, hitting everything and anything. Texas batters finished the night with 16 hits, but none were as impressive as redshirt senior outfielder Mike Antico.

Antico finished the ballgame with four hits on five at bats, including three extra base hits and five RBIs. Not only did Antico get on base, but he also showcased his agility and speed as he stole two bases.

“We were exceptional throughout the night sticking with our plan and (batting) approach,” Pierce said.

Both teams got on the board in the first inning as they exchanged runs. The Longhorns got their first lead of the game in the second inning from an Antico triple, which scored a run to give Texas a 2-1 lead.

Texas’ offense did not put up big numbers in one inning but managed to bring runners home when it mattered most. The Longhorns scored a run in the fourth, fifth and sixth innings to snag a 5-2 advantage.

When Pierce turned to the bullpen in the seventh inning with a three-run lead, two Texas pitchers struggled to find any sort of control or consistency. The bullpen allowed the Wildcats to load the bases and gave up two runs, making it a 5-4 game.

But Texas bounced back, scoring eight runs in the eighth inning to seal a 13-6 victory.

Texas will now look forward to game two of the three-game contest but will have to do so without the infielder trio of redshirt junior Cam Williams, redshirt freshman Trey Faltine and freshman Mitchell Daly. The three were ejected in the second inning after the umpires had to separate players during a collision play at the plate.

Pierce believes that his team will continue to thrive without his regular infield starters as a next-man-up approach is being used in the dugout.

“Part of why we call it a team,” Pierce said. “We have so many guys that continue to put the work in.”

The Longhorns will look to add to their sixth straight victory Saturday at 2:30 p.m., hoping to capture their fourth straight Big 12 series win.

Texas is beginning to showcase its abilities at the right time, and the players are starting to believe not only in themselves, but in each other.

“A lot of people have been saying it, and I’m going to say it as well — it’s a special team,” Antico said.