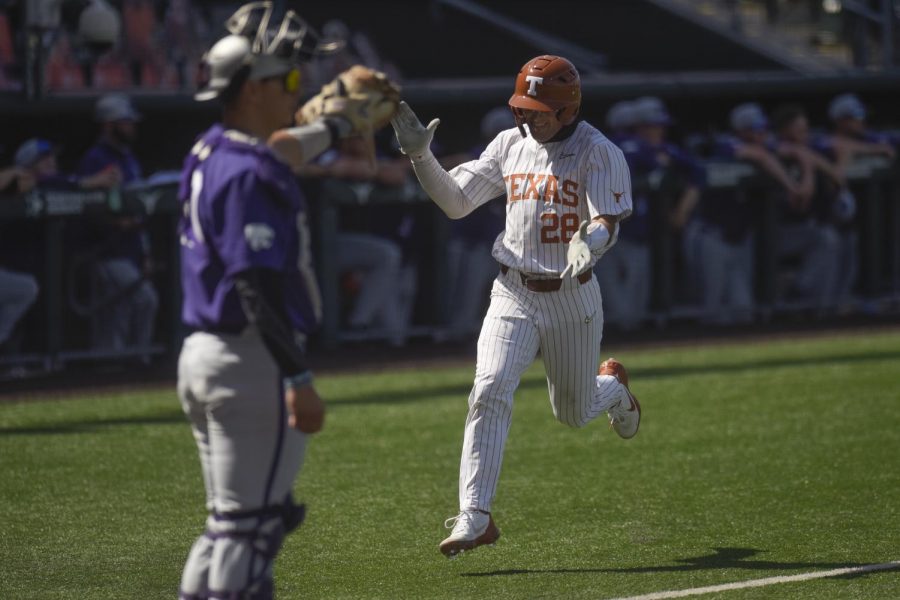 After having relied on a big eighth inning to secure the victory in game one against Kansas State, the Longhorns decided to jump out of the gates swinging and never slowed down, defeating the Wildcats 15-1 at UFCU Disch-Faulk Field Saturday.

Texas got the job done both on the mound and at the plate as they extended their win streak to seven games in a row. This might have been the Longhorns most impressive victory of the season considering they were without three experienced regular infield starters due to an ejection in last night’s contest that automatically forced them into a one game suspension.

The Longhorns showed off their depth at the infield position as redshirt junior Murphy Stehly, redshirt sophomore Lance Ford and freshman Dylan Campbell received starts in the infield and collectively picked up where their teammates had left off.

“That just grows confidence,” redshirt junior infielder Zach Zubia said. “Even our backups are good, and that’s something that showed today. Everyone played gutsy baseball.”

The trio of infielders did just about everything, as they came together for five RBIs on four hits, two extra base hits and three walks.

“They (Stehly, Ford, Campbell) know what to do,” head coach David Pierce said. “My goal is always to have not just a great team but a great program. To do that you have to have a great bench.”

The Texas offense had one of its best days of the season as they came together for 13 hits, which included two home runs and eight walks.

For the fifth straight game, redshirt sophomore infielder Ivan Melendez sent a ball out of the park, this time in the form of a two-run home run deep to center field.

With the offense putting up a large number of runs in the ballgame, it was up to redshirt junior pitcher Tristan Stevens to keep the Wildcats offense quiet. Stevens did just that, as he went seven innings only having to throw 68 pitches while managing to limit their batters to nine hits and one run.

“The consistency is huge for us,” Pierce said. “He goes out there and believes in his stuff. (Stevens) just does a nice job of attacking the strike zone.”

After coming off a four-hit game, redshirt senior outfielder Mike Antico started the game strong for the Longhorns with a leadoff solo home run, giving Texas a 1-0 lead.

Not wanting to wait until the eighth inning to grow their lead, Texas put up 12 runs in the third and fourth frames adding to their lead at 13-0.

Kansas State picked up a run in the sixth inning, but Texas came back and added two of their own in the seventh, which would ultimately be the final score of the contest at 15-1 Texas.

The game two victory ensures that Texas will win a conference series for the fourth straight time.

The Longhorns will look to sweep Kansas State tomorrow at 1:00 pm, which is something that Zubia and the entire clubhouse are not taking lightly.

“To win on Sunday is huge in the Big 12,” Zubia said. “To come into tomorrow having the opportunity to sweep, you can’t ask for a better situation.”