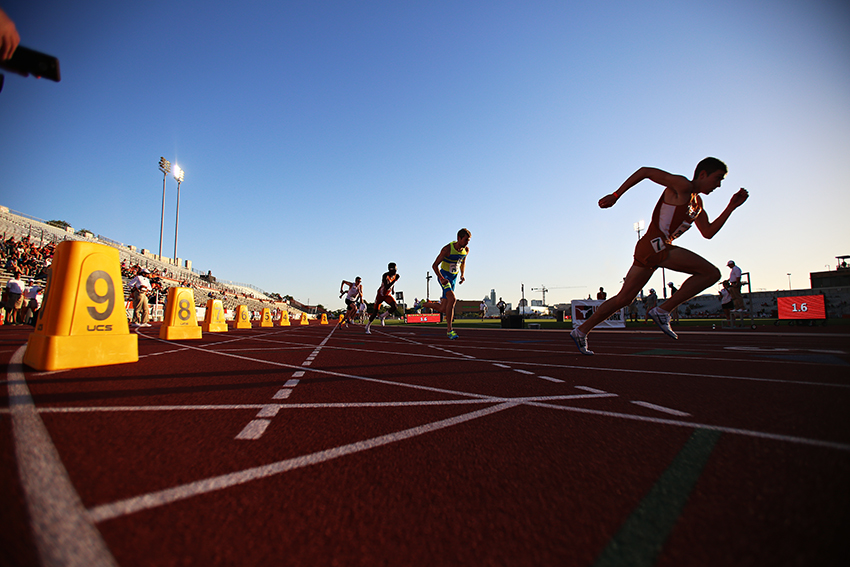 While the rest of the Texas track program competed in Waco, Texas, at the Michael Johnson Invitational on Friday, sophomore Leo Neugebauer represented the Longhorns well from over 180 miles away at the Roadrunner Invitational in San Antonio.

Neugebauer is headed back to Austin with a first place decathlon finish, a facility and meet record, a fifth-best score in the NCAA this season and the tenth-best score in UT history.

The USTFCCCA All-American and Big 12 champion swept the men’s decathlon with first place finishes in the long jump, shot put, discus and pole vault events, finishing ahead of the pack by 878 points. The only man in burnt orange among opponents from Rice, Stephen F. Austin, UT-San Antonio, UTEP, UT-Rio Grande, Akron, Texas A&M-Corpus Christi, Incarnate Word, Grand Canyon and shined with a 41-point lead after Thursday’s leg of the invitational.

Neugebauer began Friday’s leg of the three-day Roadrunner Invitational by clocking a 15.29 in the 110-meter hurdles for a third-place finish. His 110-meter hurdles time gave him 815 points to his overall 7,621-point performance.

But the sophomore wasn’t done yet. He one-upped his previous event by placing first in the discus, throwing 52.80 meters. Neugebauer threw at least 16.4 meters further than all of his competitors, beating out UT-Rio Grande freshman Alex Galvan. The dominant discus performance tacked on 929 points to Neugebauer’s overall score, proving his biggest performance of the decathlon.

As Neugebauer closed in on his final lap on the track in the 1,500 meters, the sixth-place finish proved to be the Longhorn’s final knockout punch. Neugebauer posted a 5:08.92 run, scoring his lowest performance at 509 points, but it was enough to give him the victory.

After Friday’s San Antonio performance, Neugebauer holds the fifth-best decathlon score in the NCAA for the 2020-2021 outdoor season. Georgia sophomore Karel Tilga is the current owner of the highest decathlon score at a recorded 8,484 points.

The Roadrunner Invitational decathlon winner will hang up his spikes for the weekend and won’t join his fellow longhorns at the Michael Johnson Invitational in Waco, Texas, on Saturday, instead shifting his focus to Baton Rouge, Louisiana, for the LSU Alumni Gold meet on April 24.