Texas softball unable to get out of slump, drops second straight game against Sooners 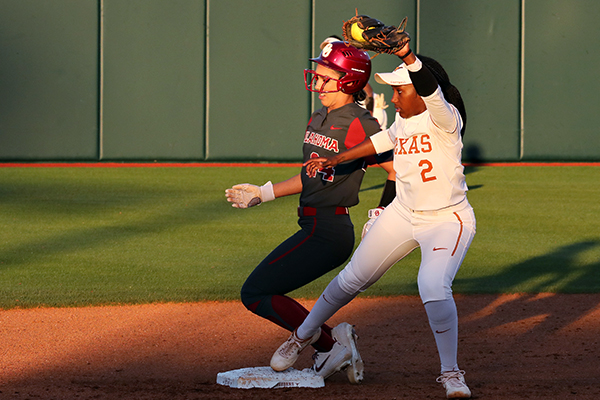 Another day in Norman, Oklahoma brought the Texas softball team another game without their joyous cheers, epic home runs and aggressive defense. Instead, the Longhorns continued to find themselves struggling to exit the Sooners’ mental dominance.

From the start of Saturday’s game until the last play, No. 7 Texas struggled to gain an inch of momentum on the Sooners and has yet to learn how to overcome both the No. 1 ranked team in the nation, as well as mental mistakes.

Jefferson barely got out of the park with her home run to left center in the third inning, nailing the ball off the back wall an inch from inside the ballpark. Her home run placed the Longhorns on the board for the first time in the game.

Rhodes’ solo home run ignited an opportunity for the Longhorns to gain traction. She managed a big swing, driving the ball out of the yard for her fourteenth home run of the season and moving closer to breaking the single-season home run record.

With the deficit cut to five, her teammates carried the momentum with three walks. But Texas couldn’t send any of the runners home, and the Longhorns closed at the top of the fifth identically to the third with just the one home run.

Unfortunately, the two home runs weren’t enough to throw the Longhorns into gear, as they only managed one other hit and struck out seven times against the Sooners’ Shannon Saile.

The Longhorn defense also lacked their typical zeal and tenacity that fans were privy to seeing in the team’s 31-3 start. A crucial error from Rhodes in the bottom of the fifth inning allowed the final two runs from Oklahoma to score unearned.

Graduate transfer Molly Jacobsen attempted to lead her team from the mound after sophomore pitcher Shea O’Leary pitched her first loss of the season Friday, allowing five earned runs on five hits in yesterday’s matchup against the Sooners.

Jacobsen was unable to dominate from the mound and instead gave up six earned runs in three innings. Freshman right hand pitcher Courtney Day stepped into the circle in an attempt to quell the Sooner offense but fell short as she allowed another three runs, with one earned run.

Texas will face off against Oklahoma for the third and final time for the weekend Sunday afternoon at 4 p.m. The Longhorns, who dropped to 31-5 on the season and 6-2 in conference play, will have to figure out how to play their own game and dominate the Sooners from the get go to come out of the weekend with a win.