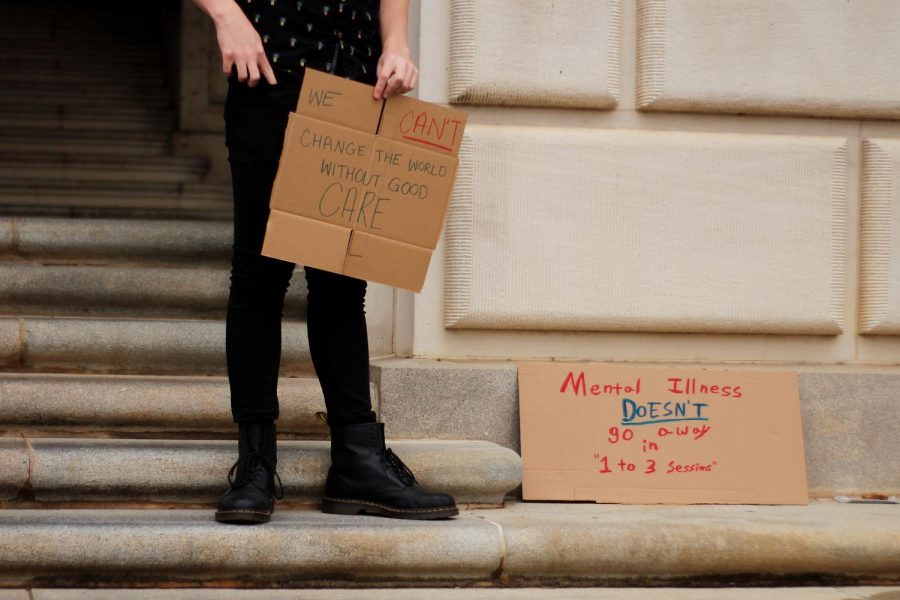 Trigger Warning: This story contains descriptions of a suicide and suicidal thoughts. This story also discusses depression and mental illness.

About 15 students displayed signs with phrases such as, “Stop putting mental health on the back burner,” and “Where are our appointments?” in front of the tower Friday afternoon to advocate for better mental health infrastructure at UT in memory of the Towhid family.

Students Organizing for Support, a coalition of student organizations who are staging sit-ins every Friday afternoon in front of the tower, created a list of high priority recommendations for improving mental health resources that include providing six counseling sessions to students each semester, starting mandatory mental health trainings for faculty, and creating better alternatives to the UT Police Department and the Behavior Concerns and COVID-19 Advice Line in the event of a life-threatening mental health crisis.

The coalition began planning the mental health sit-ins after Allen police confirmed Farhan Towhid, a former UT student, posted a social media message saying he and his brother murdered their family and then both committed suicide on April 5. Farhan said in the message that he and his brother had suffered from severe depression for years. Andre Rezaie, campus director of University Democrats, said the coalition wants to improve mental health resources at UT to help prevent tragedies like this from happening again.

“We intend to be out here for as long as it takes,” architecture senior Rezaie said. “We want (UT) President (Jay) Hartzell and the administration here to take notice and take action. … Issues like this tragedy that recently occurred kind of fell under the radar, and all they could offer were their thoughts.”

University Democrats member Josh Williams said he has not been able to get a Counseling and Mental Health Center appointment for three semesters.

“It feels like it’s our responsibility to help in speaking out because if UT is not going to care and they’re going to act like people are silent on it, then we need to get louder about it,” history sophomore Williams said.

Government senior Brandon Bradley, the president of University Democrats, said multiple students he spoke to at and before the sit-in said they were only guaranteed one to three sessions from the CMHC.

Katy Redd, associate director for prevention, development and media relations at CMHC, said the center does not have a specific policy for how many sessions a student is guaranteed.

“There’s not a one-size-fits-all approach,” Redd said. “It’s really individualized based on the individual person … (each student) might be going through something that is very different from what their friend is going through, so they might be recommended a different set of services.”

“It feels like both those things are lacking because people who are like, ‘I need something now,’ (they’ll) be put on a waitlist for two months,” said Melendrez, a government and philosophy senior.

Anyone can attend the sit-ins, and masks are required, Melendrez said. He said the coalition is protesting in front of the tower instead of the CMHC because they want the University to allocate more money to mental health services rather than blame the CMHC for lack of resources.

Penelope Ackling, activism director for Students Fighting Climate Change, said the University is not in touch with the needs of students and prioritizes financial gain.

“Mental illness isn’t gonna go away in one to three sessions, and it takes accessibility,” said Ackling, a sustainability and urban studies sophomore. “Especially with the pandemic, we’ve seen a rise in mental health crises, and the University needs to respond to that and be prepared to have accessible care to their students.”