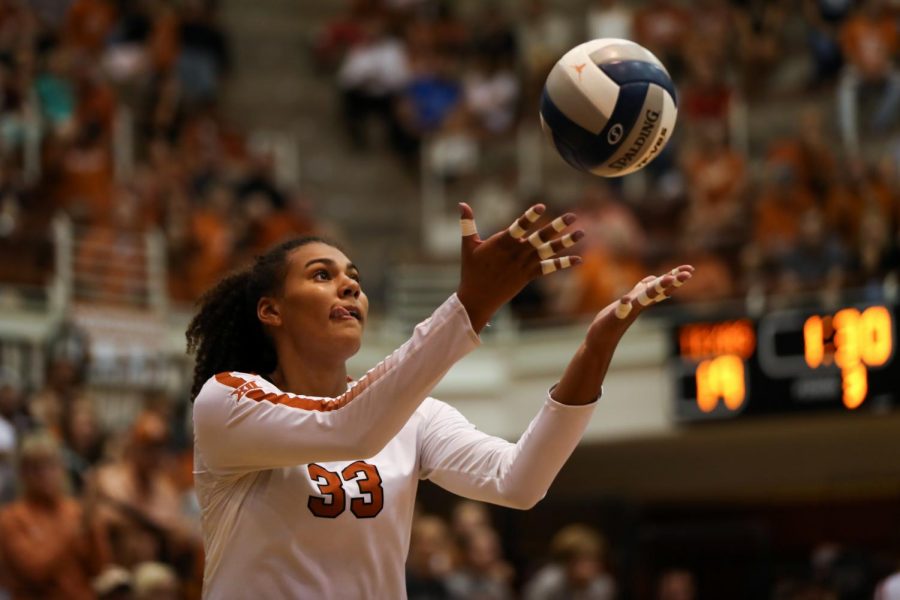 The Texas volleyball team will play in its first Final Four since 2016 on Thursday after a thrilling 3-1 victory over No. 5 Nebraska Monday night. But the dance is just getting started as the tournament’s top overall seed Wisconsin awaits.

The Badgers spent the majority of their season at the top of the national rankings and boast several weapons, including two first-team All-Americans in senior setter Sydney Hilley and senior middle blocker Dana Rettke. Only one current Texas player, graduate libero Morgan O’Brien, has ever faced the Badgers. O’Brien transferred to Texas for the 2020 season from Illinois, where she played against Wisconsin many times in Big Ten Conference play.

“I played Wisconsin a lot, and I love playing them,” O’Brien said in a press conference on Tuesday. “They have great defense (and) they battle really hard. Obviously they have a lot of good weapons and hitters, and we do too, so I think it’s gonna be a great matchup.”

The Longhorns have already beaten two Big Ten teams in the postseason, defeating Penn State 3-1 on Sunday and Nebraska on Monday. Head coach Jerritt Elliott credits those victories in helping Texas know what to expect on Thursday night.

“(Big Ten teams) play pretty similar,” Elliott said. “Wisconsin is extremely disciplined, they’ve got more firepower (than Nebraska and Penn State) and they’re balanced like we are at every position. It’s obviously a good conference and we’re gonna have to go through it to be able to win this title.”

Firepower is an understatement. Rettke is a 6-foot-8-inch blocking machine who averages 1.55 blocks per set this season, the eighth-highest average in the country and one spot ahead of Texas’s Brionne Butler. The four-time All-American has hit her stride this spring, notching season highs in kills and total blocks just in the past month.

Hilley, the 2020-21 Big Ten Setter of the Year and three-time All-American, is the backbone of the Badger offense averaging 10.86 assists per set. She has 34 double-doubles in her four-year career at Wisconsin.

The matchup is almost as balanced as can be. Texas also has two first-team All-Americans in Butler and junior outside hitter Logan Eggleston. Eggleston is coming off an 18-kill, five-ace game against Nebraska.

Perhaps the biggest individual battle lies in Eggleston’s efforts to get around Rettke and make plays, not an easy task considering Rettke is six inches taller than her. Elliott believes spreading the ball around, finding mismatches and being solid from the service line are some of the keys for a Texas victory.

But Elliott still feels confident in his team and he believes the adversity this Texas squad has faced together makes them a true contender. Regardless of the outcome on Thursday, Elliott hopes the unique and trying season made his team more resilient, emotionally and physically.

“They’re gonna remember this for the rest of their life,” Elliott said after the win against Nebraska. “They’re all super excited and getting thicker skin, and hopefully they’ll be able to use some of these skill sets when they get a little bit older.”