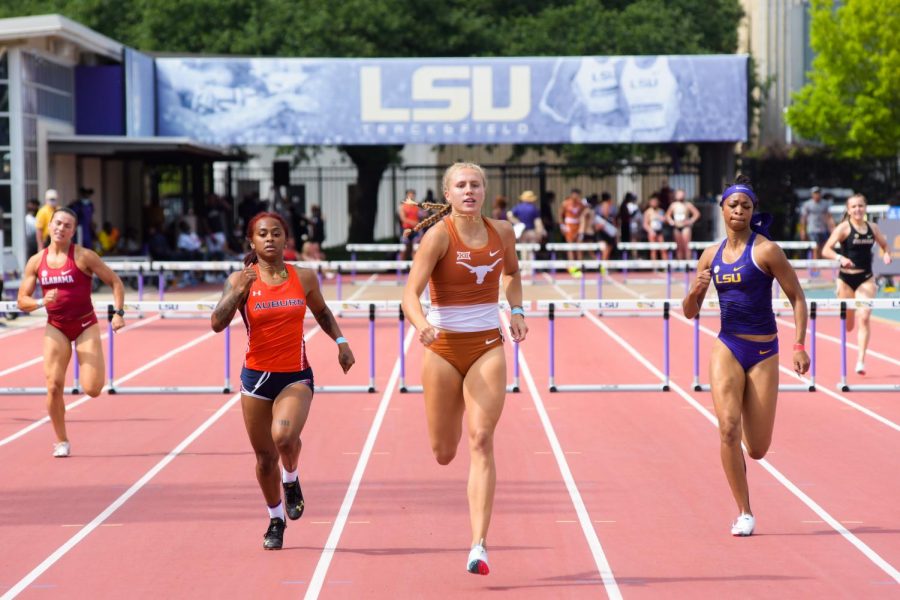 The No. 5 Texas women and the No. 7 Texas men faced the No. 1 ranked LSU Tigers down in the bayou this weekend.

The Texas track and field team entered SEC country on Friday for the LSU Alumni Gold meet in Baton Rouge, Louisiana. Junior Tara Davis returned to her original college conference of the SEC –– where she previously competed at Georgia –– and came home to Big 12 territory with a new record in hand.

Davis, a NCAA record holder in the women’s indoor and outdoor long jump and four-time USTFCCCA All-American, is now the fastest Longhorn on record to clock the best all-conditions time in the 100-meter hurdles. Throwing the horns up at LSU’s Bernie Moore Track Stadium, the junior clocked 12.61 for a second-place finish. Davis finished behind LSU senior Tonea Marshall, the current NCAA season record holder for the 100-meter hurdles.

Davis’ massive personal record was wind-aided and disqualifies her from claiming another school record to add to her résumé. Yet, her 100-meter hurdles finish advances her to No. 2 on the NCAA leaderboard for the 2020-2021 season.

Senior Micaiah Harris ran his fastest 200-meter dash, crossing one half of a lap at 20.08 seconds. Harris placed second behind LSU senior Terrance Laird, who finished the 200-meter dash at 19.82 seconds.

Like Davis, Harris’ personal-best performance was wind-aided, preventing his time from ever touching the record books. The senior’s time, however, is still the fastest by a Longhorn in all conditions.

Junior javelin thrower Rhiley Fritz placed second in the event and raised her season-best performance to 52.96 meters. Fritz now holds the third-best mark in UT history behind former Longhorns Niki Nye and Haley Crouser, both of whom hold records in the 55.6-meter range.

The four-women relay in the 4×100-meter relay, headed by senior Serenity Douglas, freshman Kevona Davis, freshman Rhasidat Adeleke and junior Kynnedy Flannel, placed third behind first-place finisher LSU. The 43.11-second finish by the women on Saturday is the 10th-fastest in UT history.

Senior hurdler Charles Brockman III crossed the 100-meter mark in the men’s hurdles at 50.93 seconds. The senior took to social media to express his thoughts.

“I’ve been running some pretty good races lately, but today wasn’t the best,” Brockman said on Instagram. “But now, more than ever, I’m proud to say I’ve gotten to a point of feeling so … undefined … by my off days. … Ready for the next!”

The team will return to Austin to race on home turf at the Texas Invitational from April 30 to May 1.