No. 2 Texas loses to No. 3 Baylor in Big 12 Championship, looks ahead to NCAA Championship 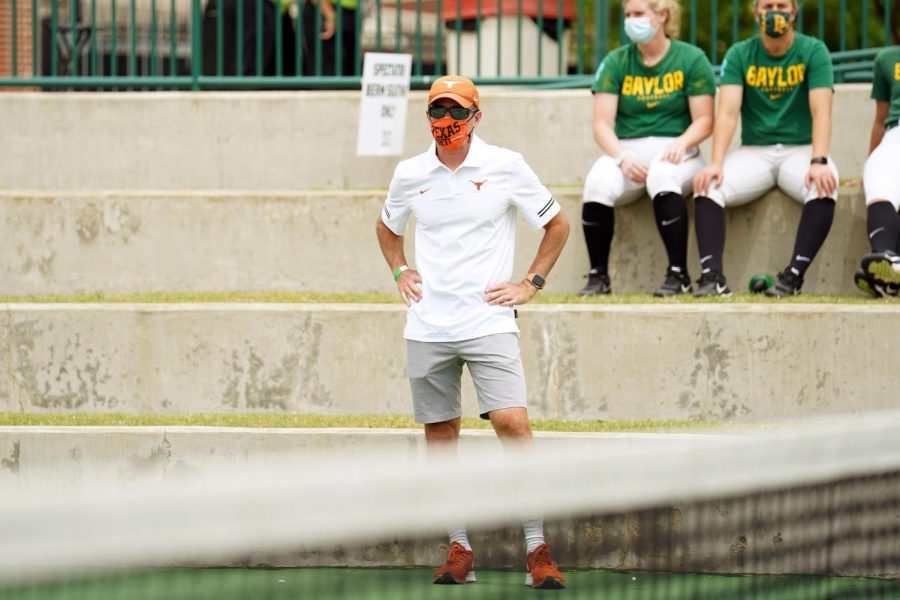 Cleeve Harper booted the tennis ball off the court as the Baylor fans mocked him after he double faulted in his second set. It was that kind of day for the Longhorns.

For the second consecutive season, No. 3 Baylor clinched the Big 12 Championship over No. 2 Texas on Monday afternoon, this time with a 4–0 sweep at Hurd Tennis Center in Waco. For this young Texas squad, a loss of this magnitude could derail their high flying season. But head coach Bruce Berque offered his guys some perspective after the match, reminding them how Texas’ 2019 team was in the exact same spot after losing to Baylor in the Big 12 Championship Final. The Longhorns that year went on to win a National Title in Florida.

“I did tell them that I have a pretty distinct memory (of) two years ago in 2019, losing in the finals of the Big 12 tournament after winning the regular season … and guys being crushed,” Berque said. “Fast forward three weeks later and they were holding the national championship trophy.”

Although Berque was disappointed to lose out in the final, he remains optimistic about Texas’ chances of winning a second consecutive NCAA Championship.

“We’ve had an incredible year for such a young team. To be 20–5 and not have one loss beneath the top six or seven (teams) in the country is pretty amazing,” Berque said. “We’ve beaten Florida, who’s number one, we beat Baylor who’s probably going to be number one this week. So I think good things could be ahead for the NCAA Tournament if we can learn from this and keep moving forward.”

Monday’s Big 12 Championship final marked the fourth occasion this season that the two programs have met, including a Texas victory in Waco less than two weeks ago. Berque believes that Texas was not at the same level Monday as they were on that day, but credits Baylor for raising its game for the final.

“I would say 80% credit to them, and probably 20% (blame) on our end,” Berque said. “Not quite as good … or sustained level of play, and not quite as tough as we were last time.”

Texas dug themselves into a hole from doubles onwards, losing at No. 1 and No. 3 doubles to start the dual match down 1–0.

The Longhorns got off to a good start in singles play, but ultimately lost all but one of its first sets to make the deficit almost insurmountable. Baylor picked up quick wins in dominant fashion at No. 2 and No. 5, before taking No. 1 singles to clinch the Championship.

Now, Texas will regroup after a grueling regular season ahead of the NCAA Championship Regionals that will take place at the Texas Tennis Center in Austin on May 7-9.

Before gearing up for the NCAA tournament, Texas will light the tower for their regular season conference win, which Berque said will help take the team’s mind off the loss to Baylor.

“I think the first thing is to just take a little mental break. We’ll take a physical break for a couple of days too,” Berque said. “On Wednesday night we get to light the tower, so that should get everyone feeling proud again about the season they had, and then a week from now we’ll start gearing up mentally for competition.”