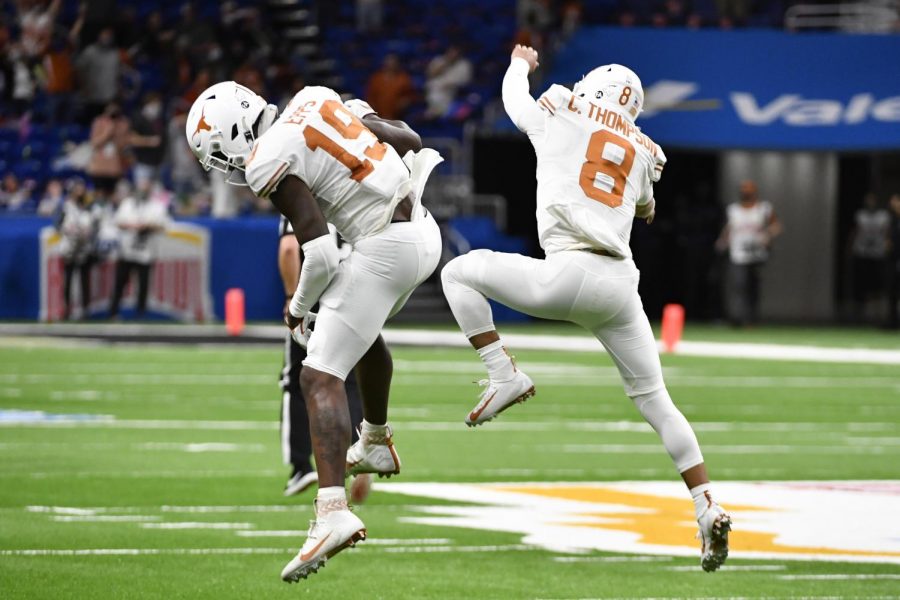 Editor’s Note: This article first appeared in the April 23 issue of The Daily Texan.

For four straight seasons, Sam Ehlinger was the face of the Texas football program. This fall, a new player is replacing him as quarterback. The Longhorns just don’t know who that guy is yet.

Junior quarterback Casey Thompson waited three years behind Ehlinger for his moment to lead Texas, and that moment finally came in the 2020 Alamo Bowl. Thompson replaced an injured Ehlinger in the second half against Colorado and completed 8 of 10 passes for 170 yards and four touchdowns, seemingly taking the keys to the Texas program on that Dec. 29 night.

But there is no such thing as a seamless transition in college football, especially at the quarterback position. If Thompson is to line up under center for the team’s season opener in September, he must first beat out redshirt freshman quarterback Hudson Card for the job.

“Me and Hudson (Card), yeah we’re friends on and off the field, but whenever we go out, we want to be the best player, and obviously we’re going to try to beat each other,” Thompson said. “I think there’s a friendly and healthy competition that’s going on.”

Even though Thompson is a veteran within the Texas program compared to Card, who has only been on the team one year, both quarterbacks are on the same playing field. That’s because new head coach Steve Sarkisian is implementing an entirely different offense than what the Longhorns ran last season.

“There’s a lot of new things to learn, just having a new offense and new coaching staff,” Card said. “It takes time, but I feel like we progressed well this spring, and we both kind of adapted to a new style and new offense. We’re just trying to grow each and every day.”

Card said he enjoys Sarkisian’s aggressive mindset in his offensive play calling. Last season, Texas ranked No. 32 in the nation for yards per pass attempt at 8.1, but Sarkisian is putting an emphasis on the deep ball this spring.

“(Sarkisian) loves to take shots … so just understanding when the shots are there and when to check the ball down, because just knowing he’s going to call those plays over and over again,” Card said. “(It’s about) taking the right opportunities as they come and being smart with the football.”

While Ehlinger may have moved on to attempt a career in the NFL, his presence and the lessons he taught the quarterbacks trying to replace him still sticks with them, Card said.

“Sam (Ehlinger) did a great job at kind of showing me the ropes on and off the field and how to mentally prepare yourself for games,” Card said. “Everything outside of football, too, just carrying yourself a certain way.”

In an era of college football where most four-star quarterbacks expect to start within their first two years on campus and transfer if they don’t, Thompson said his experience as a backup for three years has helped him mature as both a player and individual.