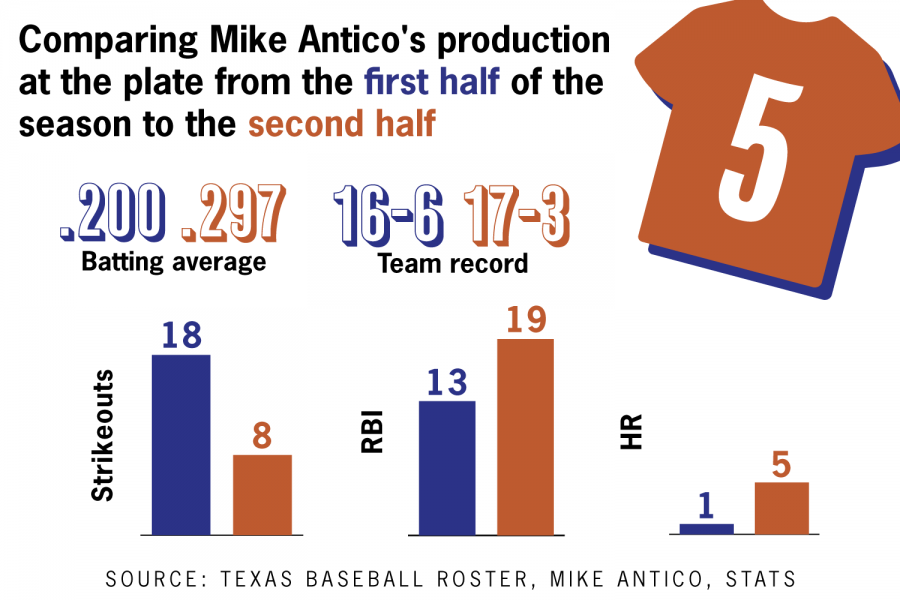 Mike Antico is used to enduring ups and downs in a season as the most experienced player on the Texas baseball team, but this season’s turnaround felt a little more satisfying.

“Baseball is a crazy sport,” Antico said after a win against Abilene Christian on April 18. “There’s a lot of ups and downs and you’ve got to try and stay even throughout.”

Antico, a redshirt senior and transfer from St. John’s University, started his Texas career with one hit in three games at the 2021 State Farm College Baseball Showdown in Arlington, Texas. The Longhorns lost all three games to top-ranked opponents, but while Texas rebounded as the season continued, Antico found himself in a prolonged slump. Through March 27, Antico was batting .200 at the plate and had more strikeouts than RBI.

“I expect a lot out of myself,” Antico said. “I came here to do as good as I can and when you’re not playing at your full potential, it’s tough.”

It wasn’t until April 9 when the Longhorns faced Kansas State that Antico hit his stride in a Texas uniform. He went on a tear, scoring one run on four hits and hitting two key doubles that led to a Longhorn victory.

While April 9 was indeed Antico’s coming out party, his ascension at the plate started March 27 when his batting average bottomed out at the lowest it had been all season.

Since March 27, Antico is hitting .297 from the plate with only eight strikeouts and 19 RBI. As Antico’s personal performance has increased, so has the entire team’s. The Longhorns are 17–3 since March 27 compared to 16–6 before.

“As you guys can see, (head coach David Pierce) has stuck with me,” Antico said. “I was never really worried about losing the spot (in the batting order) or whatever, I just show up everyday and put in the work and I trust that the rest will take care of itself.”

Antico’s experience throughout his career at St. John’s played a big part in his extraordinary turnaround at the plate this season. Because he was familiar with slumps from his extensive collegiate career, Antico calmly took his time and continued to work on his craft so he could turn his season around. As a result, both he and the Longhorns as a whole have flourished.

“I’ve been through this before,” Antico said. “My last full year of college baseball in my junior year, you look back and it says he hit .380 or whatever, but what you don’t see is that I was hitting .180 throughout the first month and a half.”

With just 13 games left on the regular season schedule, including one final road trip to Fort Worth, Texas, Antico said he and his teammates will continue to put the necessary time into practice so they can finish the year out strong.

“This lineup and this team shows up every day and gets after it,” Antico said. “Once we get out on that field, we compete and the game comes easier when you put all that time in.”

Editor’s Note: This article first appeared in the April 27 issue of The Daily Texan.