The Daily Texan • May 1, 2021 • https://thedailytexan.com/2021/05/01/texas-offense-absent-as-longhorns-drop-second-straight-game-to-oklahoma-state/ 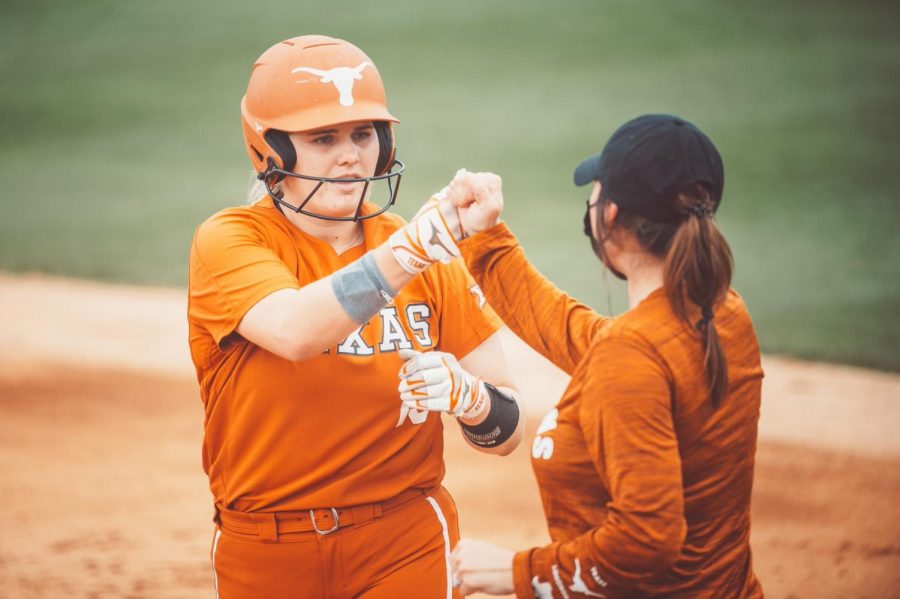 As rain started to fall again on Red & Charline McCombs Field on Saturday, the No. 12-ranked Longhorns began their march back to the dugout, the disappointment of a second straight loss, 5-1, to conference rivals and the No. 9-ranked Oklahoma State Cowgirls mounting on their shoulders.

There was a lot of uncertainty about who would come out on top heading into this three-game series. It was a battle between two antithetical play styles: elite pitching versus power hitting.

The Longhorns currently rank third in the nation in batting average at .369 and seventh in scoring at 7.4 runs per game. The Cowgirls bullpen boasts the country’s fifth-lowest ERA at 1.41 earned runs a game, the best in the Big 12 Conference. In big time matchups like this, it can be almost impossible to predict a decisive victor. Almost.

Texas head coach Mike White might have said it best.

The Cowgirls’ pitching on Saturday was beyond great, as redshirt sophomore pitcher Kelly Maxwell struck out nine batters and allowed only one run through seven innings of play. The Longhorns’ high-octane offense, on the other hand, was all but absent.

And that was it. Out of an entire squad full of premier hitting talent, only a single player from the Texas dugout recorded a hit in Saturday’s game.

Home-run heroes junior utility player Mary Iakopo and senior catcher Shannon Rhodes couldn’t find anything in their three at-bats each. Sophomore shortstop McKenzie Parker, despite her tremendous improvement on the season, wasn’t able to glean a hit off of Maxwell either. Even junior second baseplayer Janae Jefferson, an All-American and the team leader in batting average, didn’t record a single hit in her three at-bats.

The Longhorns’ struggles didn’t end there. On the other side of the ball, some of Texas’ past defensive woes came back to haunt them.

Freshman pitcher Courtney Day opened in the circle for the Longhorns for the seventh pitching start in two seasons. She managed to stifle the Cowgirls at first, leaving them scoreless through most of the first three innings. However, she surrendered the first score of the game after throwing a wild pitch with a runner on third.

After that, the Longhorns’ defensive floodgates gave way as the points started pouring in for Oklahoma State. A quick mounting of the bases followed by an RBI double posted another two points on the board for the Cowgirls.

Freshman pitcher Ryleigh White came in for relief, but as the Cowgirls continued to stack the bases, another wild pitch followed by a costly error gave up another run.

White was able to recover, recording a pair of strikeouts as she held Oklahoma State scoreless through the next two innings. But in the absence of a successful offensive charge by the Longhorns, her efforts were in vain. A lone Cowgirl home run in the top of the seventh all but secured Texas’ defeat, their second straight in the series.

The Longhorns look to regroup and redouble their efforts in their last game of the series on Sunday.