No. 12 Texas softball swept by No. 9 Oklahoma State, drops to 9–6 in conference play 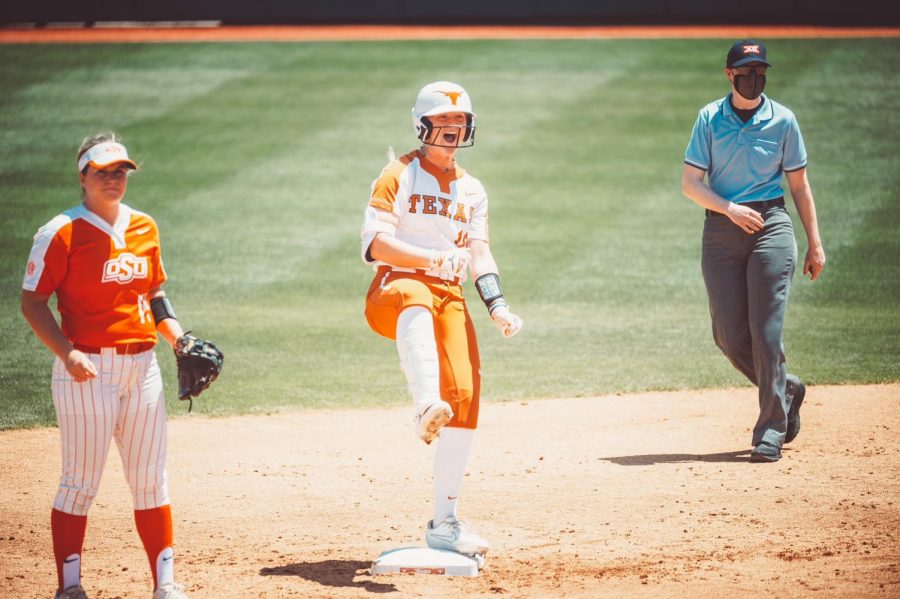 The Texas offense showed far more life in the series finale against the No. 9-ranked Oklahoma State Cowgirls on Sunday after putting up a combined two runs in their first two games of the weekend series. However, the Longhorns ultimately lost Sunday’s game 4-6.

The Texas softball team earned their first lead of the series after two innings of play. Texas loaded the bases after a walk by sophomore infielder Colleen Sullivan, a double by freshman designated player JJ Smith and a single from freshman infielder Alyssa Washington. The Longhorns managed two runs out of the effort and posted as many hits in two innings as they had the entire second game of the series. All momentum seemed to be in Texas’ hands. That is, until the Cowgirls exploded for four runs in the top of the third inning.

Despite showing defensive vigilance through the first two innings, the Longhorns got caught flat-footed on a steal at second base by Oklahoma State senior outfielder Chelsea Alexander. On the very next pitch, a costly Texas fielding error on a bloop hit allowed Alexander to score and stacked another runner on second.

Oklahoma State continued to capitalize on shaky fielding and pitching from the Texas defense and extended their lead to 6-2 by the top of the fourth inning. Senior outfielder Shannon Rhodes, who finished the day batting 2-for-4, engineered a two-run rally in the bottom of the fourth inning off an RBI single to cut the deficit to 6-4. However, the Longhorns would be shut out the rest of the day.

Carrie Eberle, Oklahoma State’s ace pitcher, came in with the clear strategy of throwing outside of the strike zone to bait the Longhorns into costly strikeouts and weak hits. In four innings of work on Sunday, Eberle gave up only two earned runs and three hits.

However, the Texas dugout learned from their previous mistakes. The Longhorns showed tremendous plate discipline as they gleaned five walks off of the Oklahoma State graduate student, who hadn’t walked a single batter in Friday’s game, the first of the series.

But the offensive improvement wasn’t enough to win the last game of the series, as Oklahoma State tightened up on the earlier defensive mishaps. Graduate student Logan Simunek and redshirt sophomore Kelly Maxwell came on in relief of Eberle and allowed a combined one walk to close out the game, dashing any hopes Texas had of a comeback victory.

Following the loss, the Longhorns dropped to 9-6 in conference play. They still retain their spot at third place in the Big 12 Conference behind Oklahoma and Oklahoma State.