The Daily Texan • May 2, 2021 • https://thedailytexan.com/2021/05/02/texas-baseball-prevents-series-sweep-with-dominant-sunday-win-against-texas-tech/ 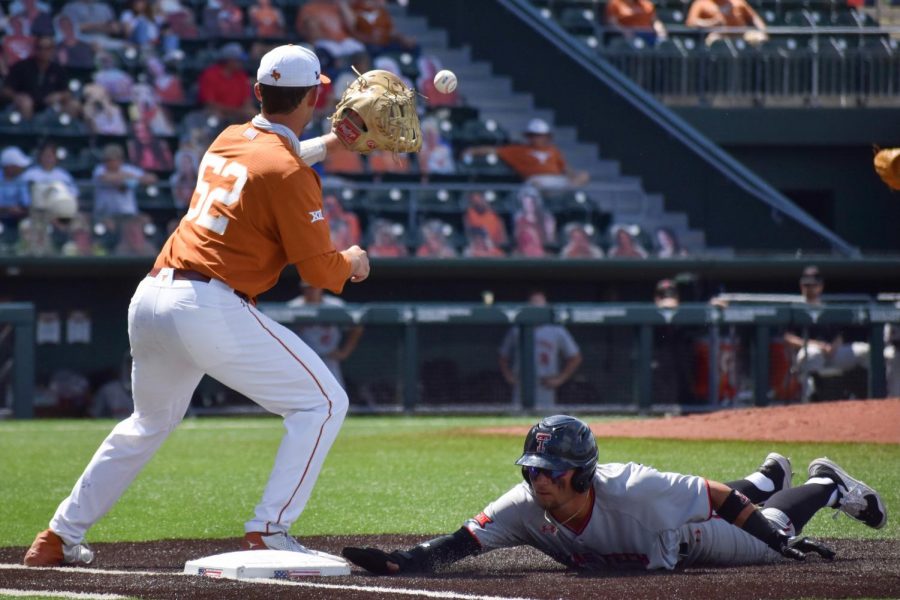 Due to torrential downpours in Austin on Saturday, the Texas baseball team was forced to finish the last two innings of Saturday’s game as well as the series finale against Texas Tech on Sunday afternoon.

Although Saturday’s game was suspended in the middle of the eighth inning, it did not disappoint.

In the top of the sixth inning with the score tied 0-0, the Red Raiders loaded the bases with freshman infielder Jace Jung at the plate. Texas redshirt junior pitcher Tristan Stevens had to battle the rainy weather to keep control of his pitches and prevent Texas Tech from running away with the game.

Stevens threw a fastball in hopes of getting Jung to whiff, but instead he hit the batter’s foot with the pitch and allowed the runner on third to score. Texas Tech never looked back. Stevens lost his poise on the bump, allowing a double to bring two more runs in before throwing a wild pitch that surrendered yet another run. When the inning finally ended, Texas Tech had extended their lead to 5-0.

Texas got a rally going in the seventh and eighth innings off a home run from redshirt sophomore infielder Ivan Melendez and subsequently loading the bases, but the weather stopped all momentum the Longhorns had gained. When the two teams finished the contest on Sunday, the Red Raiders prevailed 5-3.

Texas Tech had the series lead at 2-0 and were looking to complete the series sweep on Sunday, but Texas had different plans. Head coach David Pierce said the Longhorns were in survival mode, and they brought an energy to the game that the Red Raiders just couldn’t match.

“We knew coming back today was going to be a tough day,” redshirt freshman infielder Trey Faltine said. “We were going to have to bounce back quickly and come together as a team, stay mentally tough and find a way to win and survive the series.”

Once again, Melendez got the Longhorns’ offense started when he hit a triple in the second inning and scored on a throwing error. This time it was Texas running away with the game, as they scored three more runs in the inning to extend their lead to 4-1.

“‘Just get hot’ was kind of what I was thinking in the moment,” Hansen said. “My arm feels good, and however much the coach needs me, I’m ready and I’m there.”

Redshirt freshman outfielder Douglas Hodo III put the nail in the coffin in the seventh inning with a grand slam home run that brought the game to its ultimate final score of 11-3. Although they weren’t able to win the series, the Longhorns showed resilience in their fight Sunday afternoon.