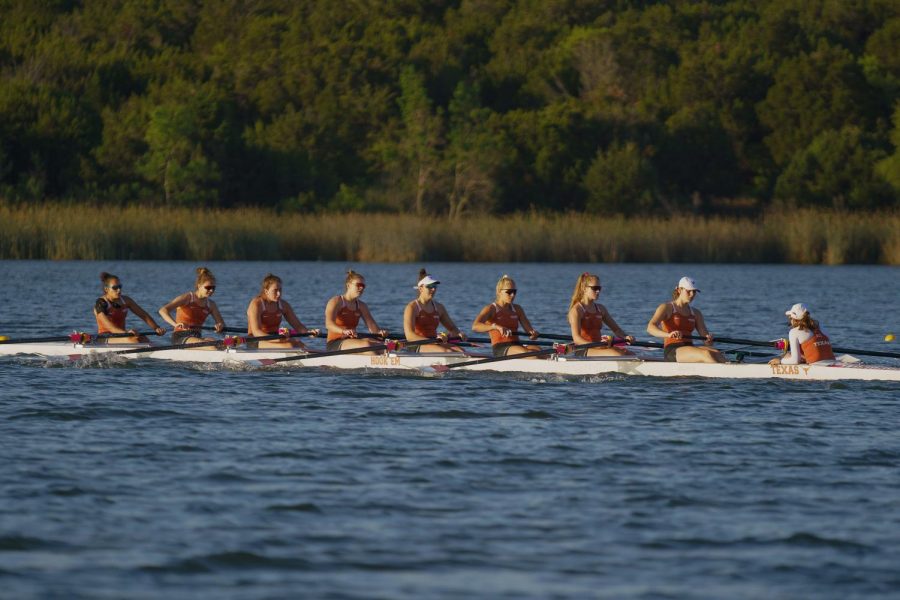 Texas Rowing earned their second sweep of the season against a top-ten school this weekend when they traveled to Earlysville, Virginia, to face the No. 3 Virginia Cavaliers at the Rivanna Reservoir.

In their first meeting with the Cavaliers since 2017, Texas won all four races. The I Eight, led by Rachel Rane (coxswain), Kaitlin Knifton (stroke), Francesca Raggi, Alexandra Watson, Aspa Christodoulidis, Daisy Mazzio-Manson, Anna Jensen, Katelyn Bouthillette and Lisa Gutfleisch (bow), set a course record with a time of 6:15.2. Virginia trailed behind with a time of 6:27.0. The Longhorns were boosted by favorable weather conditions with little wind and flat water.

Texas head coach Dave O’Neill said he was impressed with the leadership and guidance the coxswains on the I Eight showed today, as well as with how the group has come together throughout the season.

“I was particularly impressed with our coxswains, who navigated the turn perfectly and put our boats in a great position,” O’Neill said. “Of course, the I Eight was really good. They’ve been working on a few things, and they’re coming together pretty well.”

The II Eight, consisting of Olivia Fogarty (coxswain), Hannah Medcalf (stroke), Amber Harwood, Alexa McAuliffe, Izabela Krakic, Parker Illingworth, Emily Courtois, Susanna Temming and Maria Valencia (bow), defeated the Cavaliers with a time of 6:28.5. The two teams were even at the 500-meter mark before Texas extended their lead after the turn. Virginia finished in second place with a time of 6:34.5.

The I Four, including Grace Goodell (coxswain), Kathia Nitsch (stroke), Cassandre Korvink-Kucinski, Marlowe Eldridge and Claudia Destefani (bow), started in the outside lane and continued to increase their lead throughout the course, finishing with a time of 7:11.8. Virginia trailed behind with a time of 7:20.2.

The II Four, led by Elizabeth Romero (coxswain), Mara Royse (stroke), Jane McGee, Rachel Craycroft and Sophia Calabrese (bow), had a similar race, starting on the outside and increasing their margins after the turn before finishing with a time of 7:26.5. Virginia finished at 7:42.2.

Through three races this season, Texas has won all eight duel races and five Final A races. O’Neill said he is impressed with his team’s ability to compete away from home.

“We expected today to be an important one for our team,” O’Neill said. “Racing a top team like Virginia on their home course creates some real challenges, and it was great to see everyone step up and do so well.”

The Longhorns will compete next on May 16 at Walter E. Long Lake as they host the Big 12 Championships. The other teams competing will be Oklahoma, Kansas, Kansas State and West Virginia, as well as conference affiliates No. 12 Tennessee and No. 13 Alabama.