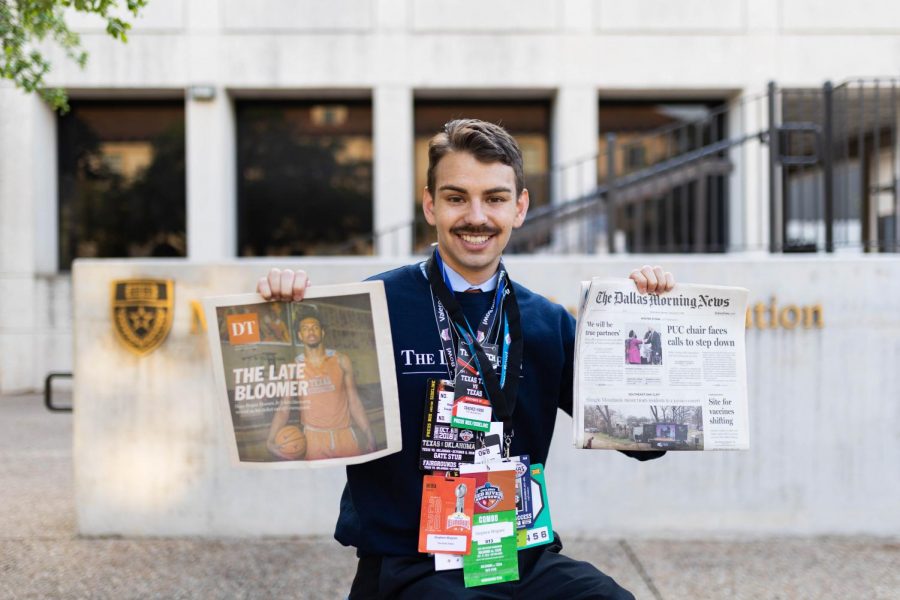 Ten semesters with the Texan taught me a few things, but nothing could have prepared me for the chaos that was covering sports during a pandemic.

I was in the basement when sports stopped last March, fresh off writing my third breaking news story of the day and texting my basketball co-writer, Wills Layton, a series of expletives I can’t repeat here. Wills and Donnavan Smoot started to scribble betting odds for which department different sports writers would transfer to before they left the Texan entirely. I’m pretty sure mine was news -200.

Most of it was because I had more friends in news than any other department, and I knew that we could at least make each other laugh enough to make the experience worthwhile. But that being said, I was jubilant when sports returned a few months later and I realized I could at least try to have a career covering the most entertaining side of journalism.

The fact is, I probably would have stayed at the Texan regardless of whether or not I could cover sports. Maybe part of it was that I had some weird, toxic attraction to that dank, roach-infested and weirdly humid basement, but most of it was because my friends there were the only people who kept me sane.

Nicole, thanks for laughing every time I compared my dating life to the state of UT football (Texas still isn’t “back,” folks). Chad, you literally never failed to make me keel over laughing from the most menial comments, like telling a waiter how excited you were to eat a horrible salad or sending a well-timed Spongebob meme.

Marcus and Myah, I can’t begin to say how jealous I am of both of your writing abilities and how far you guys have pushed me as a reporter. I know you’re both going to do incredible things. Myah, I’d be shocked if I didn’t one day read a piece by you in The Atlantic or Time Magazine. Marcus, I’m counting on bumping into you on some major beat (probably the Cowboys) in the near future.

Wills, I’m still outraged the 2020 NCAA Tournament got canceled three weeks after I booked my flight to Atlanta for the Final Four. We really, really need to make that trip up. Donnie, I know its destiny for you to cover the Yankees beat and for us to get into more shouting arguments over why they are or aren’t better than the Red Sox.

Oh, and Will –– I have no idea where I’d be if we couldn’t text each other the last-minute details of assignments we procrastinated for way too long.