The Daily Texan • May 6, 2021 • https://thedailytexan.com/2021/05/06/three-years-after-ut-system-attains-second-largest-endowment-nationwide-confusion-remains-on-how-money-can-be-spent/ 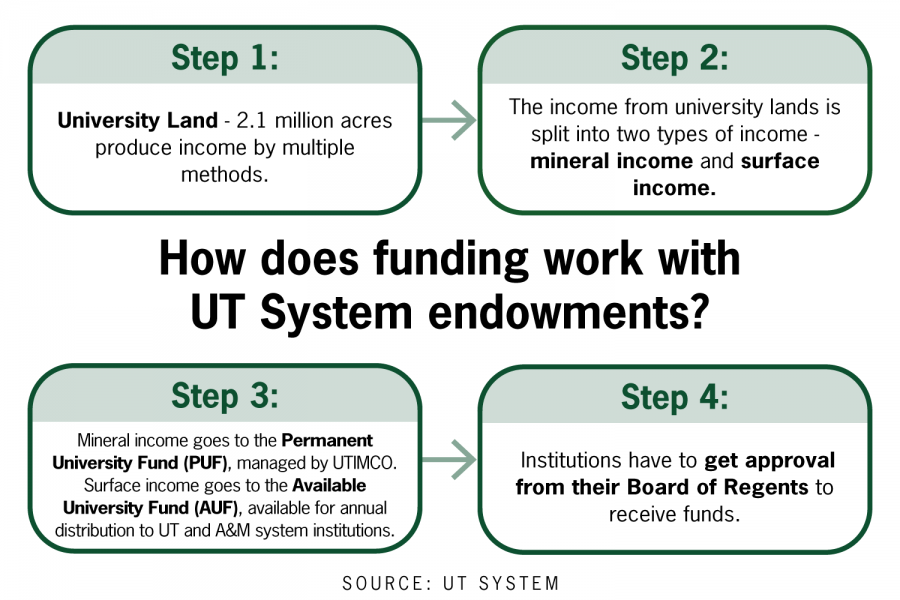 In 2018, the UT System endowment fund grew to be the second-largest in the country with about $30 billion in funds. Now, UT System experts have broken down how this money is used and collected.

The University of Texas/Texas A&M Investment Management Company manages the UT System’s endowment, which is split among four different funds: the Permanent University Fund, the Permanent Health Fund, the Long Term Fund and the Separately Investment Funds, according to previous reporting by The Daily Texan.

UTIMCO uses the Permanent University Fund, which holds about $28 billion, to reinvest in different companies such as weapons manufacturers to gain more money for the fund. Students have demanded UT-Austin divest from all weapons manufacturers, according to previous reporting by The Daily Texan.

Joe Quoyeser, interim chief executive officer of University Lands, said the company is generating the most income from oil and gas than it ever has.

Other funds include the Permanent Health Fund, which the system uses to benefit its health-related institutions of higher education, such as The University of Texas MD Anderson Cancer Center.

Donors can set up philanthropic endowments with individual institutions, which are held in the Long Term Fund. Randa Safady, the vice chancellor for external relations, communications and advancement services, said the donors’ money is never spent, but is reinvested by UTIMCO. The return on those investments are then distributed to a cause the donor marks the money for, Safady said.