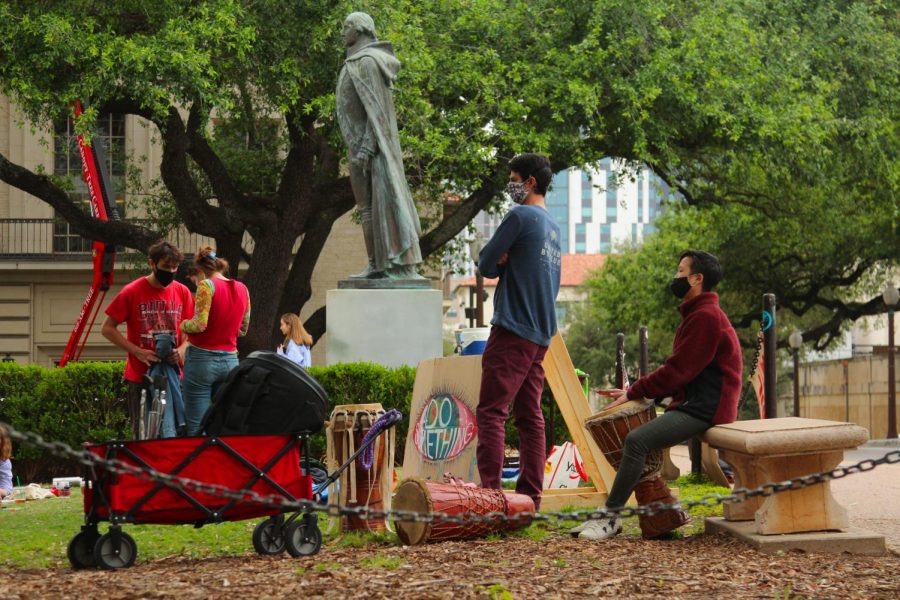 One Friday afternoon, Penelope Ackling found herself sitting on the UT Tower lawn surrounded by tambourines, mini shakers and a circle of peers. Someone threw her a drum, and she made her first attempt at finding the rhythm of the group.

“It’s beautiful,” said Ackling, an urban studies, sustainability studies and geography sophomore. “You can jump in the center and start dancing, really just whatever way you’re able to feel part of the community and have some sort of release.”

Two Fridays a month, they host drum circles around campus to attract attention and boost morale and bonding among members. Ackling said the climate crisis is a heavy topic, and students need a support system alongside their activism.

“There’s no point in fighting for a better future if we can’t take a moment to enjoy the present and … the journey,” Ackling said. “You work so much better as a team whenever you have a relationship outside of your work.”

In the spring of 2019, SFCC became an official UT organization. Now, the group has around 80 members. They advocate for climate change via petitions on their website, tabling on Speedway during weekly Friday strikes and protesting at the Capitol with signs reading, “What starts here changes OUR world” and, “Oil Free UT.”

“You get thrown into the momentum of it,” said Lisette Hotz, dance and psychology sophomore, who joined SFCC this year. “(SFCC) really asks their members to show up and give what they can.”

Their most recent display of activism was April 8, when 30 members boarded a school bus with posters and banners to campaign at the Texas Capitol before Rep. Gina Hinojosa proposed her Texas Climate Plan.

“As we were approaching the Capitol, we were chanting, ‘Stand up, fight back, when our climate is under attack,” Hotz said. “Everyone really played a part … We’re trying to turn heads.”

Dillon Brown, SFCC officer and communication and leadership senior, also attended Rep. Hinojosa’s proposal as well as a protest for an anti-divestment bill on April 19. He discovered SFCC earlier this year and participates in the Friday strikes and drum circles.

“I really wanted a more systemic, less individual … approach (to fighting climate change),” Brown said. “The best way to do that is to make a bunch of noise and say, ‘Hey, we’re here, and we’re watching you. We’re going to hold you accountable, and we’re going to be here until you do the right thing.’”

For Earth Day on April 22, SFCC turned their drum circle into an event with a chalkboard asking the question, “Why do you care about the climate crisis?” A 6-year-old girl approached the group and scribbled a message about butterflies and her love of nature.

“That’s gonna be the future leader of SFCC,” Brown said. “When we talk about the changes we’ve made, it’s a lot more intangible. It’s nice to see the future generations and someone else who wants to be part of this fight. You can make your voice heard.”