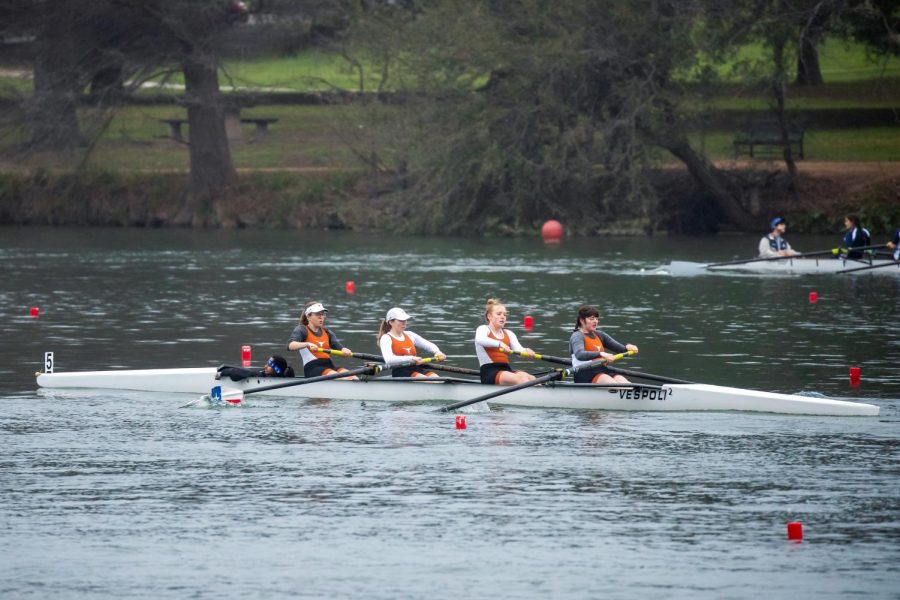 In a season characterized by impressive road performances, most notably wins against No. 7 Michigan on April 10 and No. 3 Virginia on May 2, the Longhorns capitalized on home field advantage Saturday. Texas notched a whopping 167 points in the championship meet, with second place Alabama coming in at a 26-point deficit.

The First Eight, led by Rachel Rane, Kaitlin Knifton, Francesca Raggi, Alexandra Watson, Aspa Christodoulidos, Daisy Mazzio-Manson, Anna Jensen, Susanna Temming, and Lisa Gutfleisch, started off the day strong for the Longhorns. The sophomore-led group finished with a time of 6:43.279 well ahead of second place Alabama and third place Tennessee, who finished with times of 6:56.907 and 7:03.563, respectively.

The Second Eight, consisting of Olivia Fogarty, Katelyn Bouthillette, Amber Harwood, Alexa McAuliffe, Izabela Krakic, Parker Illingworth, Samantha Schalk, Cassandre Korvink-Kucinski, and Maria Valencia, competed at a high level and showed great teamwork with a time of 6:52.303. Finishing in second and third place were Tennessee and Alabama once again, with times of 7:10.357 and 7:15.364.

The First Four, led by Carly Legenzowski, Kathia Nitsch, Sophia Calabrese, Marlowe Eldridge, and Claudia Destafani, secured a first place finish with relative ease, getting a big lead early before winning their race with a time of 7:51.683. Alabama and Tennessee again duked it out for the silver and bronze, with Alabama in second and Tennessee in third place. The programs ended with times of 8:06.949 and 8:16.405, respectively.

The Second Four, composed of Elizabeth Romero, Mara Royse, Jane McGee, Emily Courtois, and Mick Jonkers, completed the sweep for Texas with an impressive time of 7:34.774, winning the race by more than 20 seconds. Ensuring that the top three of each individual race remained the same, Alabama and Tennessee earned second and third place with times of 7:55.061 and 8:03.510, respectively.

While it was a Big 12 Conference meet, no other Big 12 school, outside of Texas, placed in the top three of any race. The No.13-ranked Crimson Tide and No.14-ranked Volunteers competed as conference affiliates.
Texas earned an automatic qualification to the NCAA Championships with the win, which will take place in Sarasota, Florida, on May 28-30. The Longhorns look to win their first national championship in program history, as they have finished in fourth, third and second place in the past three years.