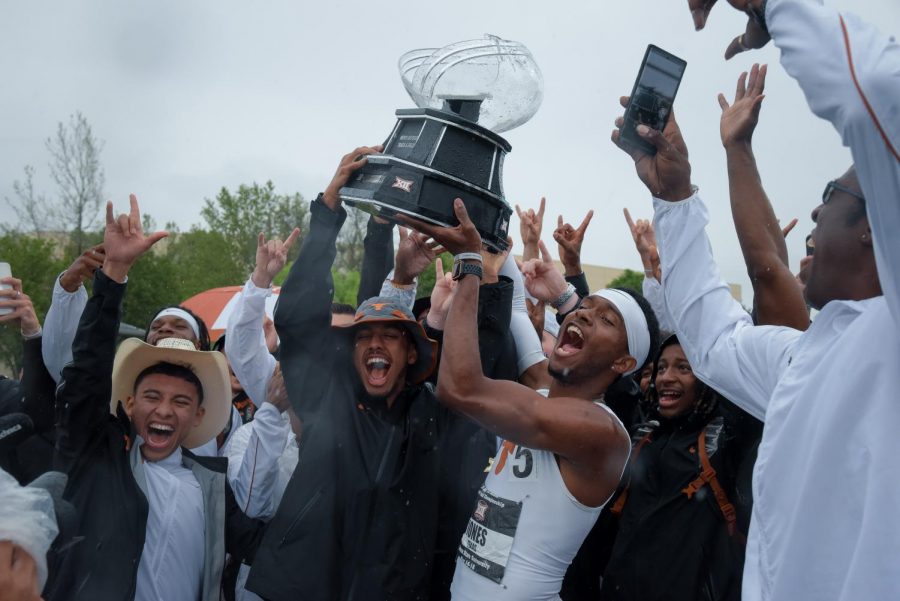 The rainy weather over the weekend couldn’t contain the Texas track and field program, with 18 individual event titles combined to earn the Longhorns a Big 12 Championship.

Kynnedy Flannel led Texas as the 2021 outdoor women’s high point winner. After consistently scoring at the top of the leaderboards throughout the season, the junior capped off the year as a five-time Big 12 champion.

“It is very special,” Flannel said. “I feel like we all put our bodies on the line, especially in this weather. We all went out there competing to the best of our ability, so it means a lot.”

Flannel broke both a Texas and facility record in the 200-meter preliminaries with a time of 22.47 seconds, dashing across the finish line with both horns up. She leaves the meet in Kansas with two new individual races to her Big 12 Championship resume: the 100-meter and 200-meter dash.

Tara Davis, a junior long jumper, recorded a collegiate record and the longest jump in the world for the 2021 indoor season at the NCAA Indoor Championships on March 13. She returns to Austin as the first Texas woman to secure a Big 12 Outdoor long jump title since 2010 after a single 6.97-meter leap.

Davis also claimed a Big 12 title in the 100-meter hurdles with a time of 13.02 seconds on Sunday. Her exhilarating performance came despite a health disadvantage, as the junior was dealing with a sprained ankle two weeks earlier.

Texas’s one-time NCAA champion and five-time Big 12 champion shot putter officially made his comeback over the weekend. Senior Tripp Piperi underwent an ankle surgery for torn ligaments after the indoor season concluded two months ago, but the senior is once again a Big 12 champion.

Piperi said Saturday’s champion-level performance was all about getting back into the competition mindset. Piperi didn’t believe he’d be competing until last Tuesday.

“I tore the ligaments in my ankle so up until last Tuesday I didn’t think I was able to compete,” Piperi said.

Texas now looks ahead to the first leg of the NCAA Outdoor Championships with the NCAA West Preliminary Round in College Station, Texas, on May 26. But for now, the Longhorns and head coach Edrick Floréal will rest and recover.

“The big word is Texas fight, and they showed plenty of that today,” Floréal said. “Right now, we’re just going to take a couple of days off, kind of get the kids’ legs back under them.”