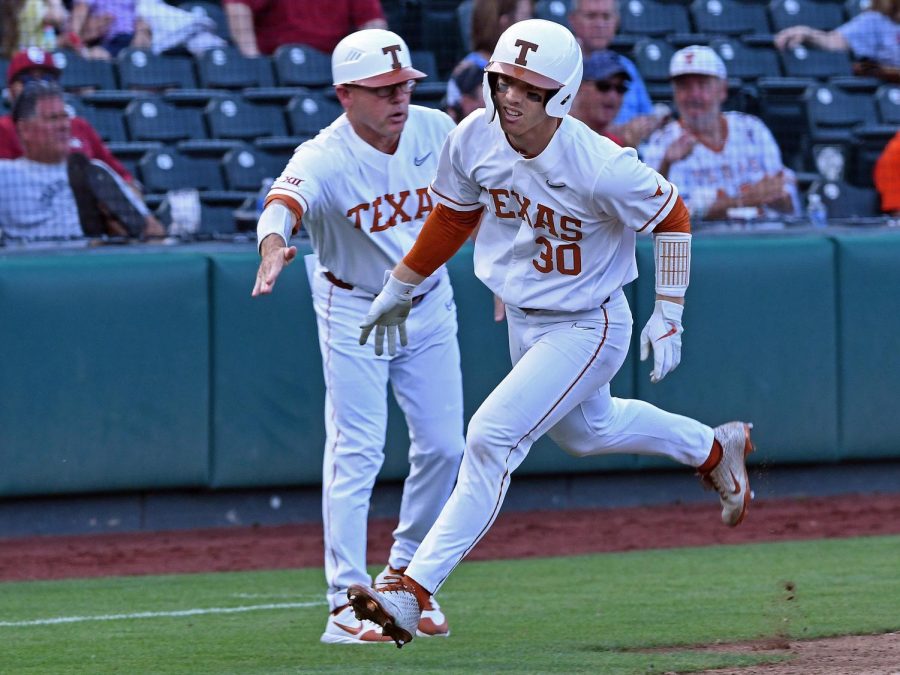 Texas found itself in a familiar position Wednesday night: down multiple runs late in the ballgame. With runners on first and second base in the seventh inning and only one out, the Longhorns looked as if they were in prime position to steal the momentum from West Virginia.

But instead of managing to cut into the lead, the No. 1-seed in the Big 12 Postseason Tournament saw itself get picked off at first base and then hit a measly pop up with the bases loaded, ultimately failing to threaten West Virginia, the No. 8-seed in the tournament. The Longhorns fell to the Moutnaineers 5-1 just days after clinching the Big 12 Regular Season Title, as the offense left six runners stranded on base.

Texas’ head coach David Pierce said his team hasn’t figured out how to rise to the occasion in neutral-site games this season, going winless in their season-opening tournament in Arlington, Texas and losing tonight in Oklahoma City, Oklahoma.

“Right now we’re 0–4 in neutral games, so we better improve (on) that if we’re going to advance and do anything,” Pierce said. “(It) just wasn’t our best day offensively.”

The Longhorns didn’t close the gap in the seventh frame, but they appeared more focused as they headed into the bottom of the eighth inning. Redshirt senior outfielder Mike Antico got the Texas rally started with a single before using his speed to steal second base and put himself in scoring position.

With zero outs and the game-tying run at the plate, the Longhorns once again failed to create any offensive production. West Virginia pitcher Jackson Wolf ended the Texas threat by swiftly striking out three consecutive batters.

While Pierce could have opted to let his hitters bunt and sacrifice outs to put runners in scoring position, the coach said he instead decided to give his players the chance to spark momentum with quality hits.

“(With) runners on first a couple of times with nobody out, I just felt it wasn’t a bunt situation,” Pierce said. “It was a situation to allow some guys to drive the ball in the gap. We just didn’t execute with runners in scoring position.”

Ty Madden, Texas’ redshirt sophomore pitcher, was recently awarded Big 12 Pitcher of the Year. But Wednesday night it was the Mountaineers’ Wolf who had the better performance, pitching all nine innings and giving up only one run on five hits. In contrast, Madden made it only 6.2 innings and gave up three earned runs.

“Ty (Madden) was okay (but) Jackson Wolf pitched an outstanding game,” Pierce said. “(You have to) tip your hat to West Virginia.”

Texas will look to bounce back Thursday at 12:30 p.m. in an elimination game against the loser of Wednesday night’s late contest between Oklahoma and Oklahoma State. The good news for the Longhorns is that they won both regular season series’ against the teams, only dropping one game in each.

Instead of being down on themselves, Antico believes that the entire team will be focused and ready to come back stronger in a win-or-go-home game.

“It’s a quick smack in the face,” Antico said. “It’s better (that) it happens now than next weekend. It’s tournament baseball — this is the way it goes. Hopefully a lot of the guys on the team can learn from this experience.”