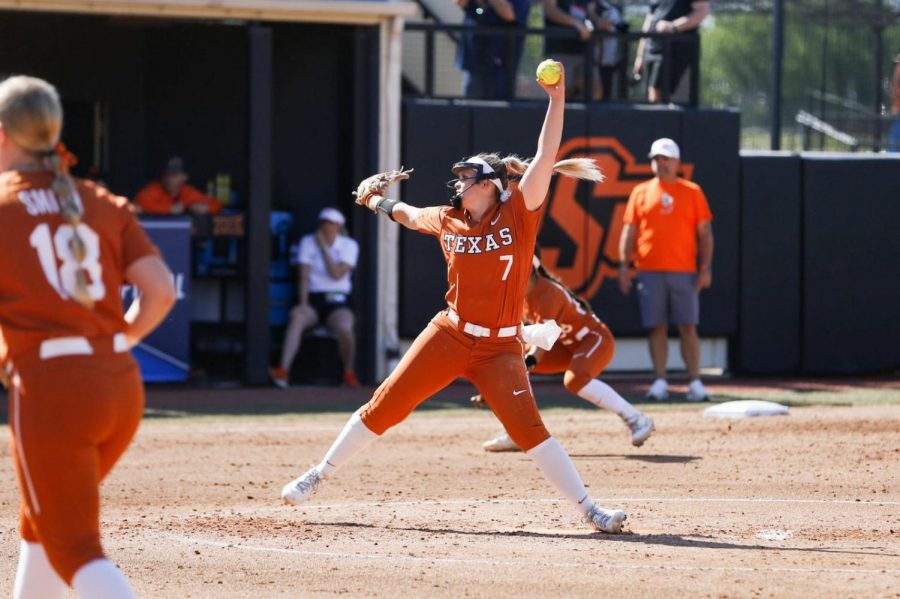 The Texas softball team has suffered merely 13 losses all season. Five of those losses have come at the hands of Oklahoma State.

“Sure, we are 0—5 (against Oklahoma State) but the game doesn’t know that. … (We’ve) got to come out tomorrow and play better,” Texas head coach Mike White said.

The No. 12-ranked Longhorns dropped their first game in the NCAA Stillwater Super Regional after giving up four home runs to a high-powered Cowgirls’ offense, ultimately falling 6-1. Texas now needs to win the next two games this weekend against No. 5 Oklahoma State if they want to punch their ticket to the College World Series.

Texas looked as if they were going to notch their first win of the season against their Big 12 rivals early on in the game as junior infielder Janae Jefferson pushed across a run in the top of the first inning. Longhorn pitcher Molly Jacobsen carried her offense’s momentum into the bottom of the first inning, striking out the first batter she faced.

The edge wouldn’t last long, however, as Oklahoma State infielder Alysen Febrey launched a two-run homer to give the Cowgirls the lead.

“Unfortunately, we made a couple mistakes with some pitches and were unable to capitalize on the start we had,” White said. “I think they were just mistake pitches.”

Following the first home run of the game, the Oklahoma State offense fed off of their home-field advantage. Their six total runs scored were more than enough insurance for pitcher Carrie Eberle, who pitched a complete game and gave up only one run.

“It’s the fact that we didn’t execute the game plan that’s frustrating,” White said. “Defensively we did a pretty good job, pitching here and there, but we are not getting complete games.”

With the Longhorns’ ticket to the Softball College World Series dependent on a win in each game Saturday and Sunday, Jefferson is still confident in her team’s ability to rally and step back up to the plate in the face of adversity.

“We just have to have a goldfish mindset,” Jefferson said. “(I need) a short-term memory of today’s game and then just bring my teammates back together and let them know it’s just one game and we have two coming up next, and we’re going to take these next two for sure.”

White expects the Texas offense to bring back their explosive hitting, which will be the key to winning these next few games with the defense holding steady in both pitching and field play.

“We played good defense today with zero errors, we’ve been playing better defense the last half of the year,” White said. “But our offense has actually been up against better pitching and is not what it should be, and we need that.”

As the Longhorns prepare to face the Cowgirls once more tomorrow afternoon, White simply expects his team to “have a little bit better effort.”

“We just have to come out tomorrow and play even stronger and bring that intensity out from the first pitch of the game,” Jefferson said.