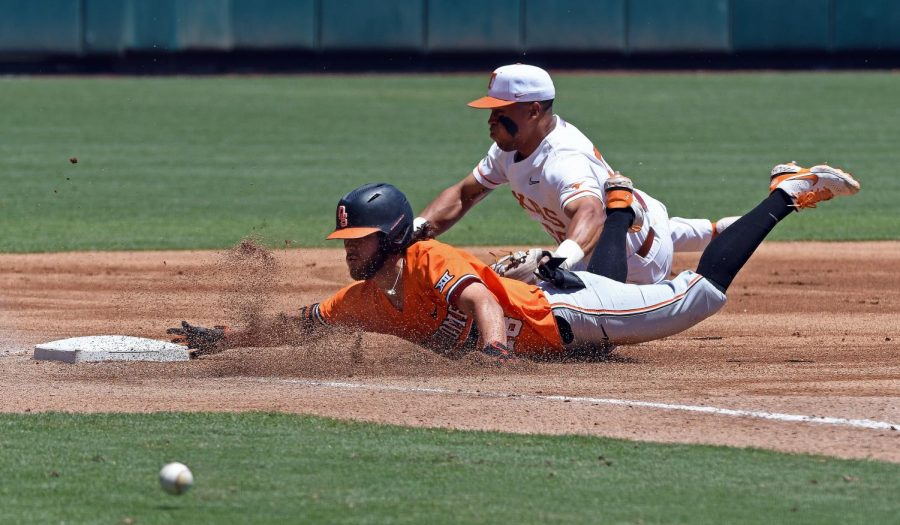 In the top of the ninth inning, Texas head coach David Pierce turned to his bullpen and brought on freshman Aaron Nixon to keep the Oklahoma State offense from scoring a game-winning run. Instead of getting three quick outs, Nixon struggled with his control and found himself in a bases-loaded situation with one out after walking a batter.

With No. 1-seed Texas’ tournament hopes on the line, Nixon walked the next batter, bringing the clinching run across home plate as the Longhorns came up short in a hard fought 5-4 ballgame. Allowing a walk-off can hurt any player’s confidence, especially a freshman. But Pierce said Nixon will brush off the defeat with the help of his teammates.

“He’s a very confident kid because he puts in the work (and) trusts his work,” Pierce said. “Aaron’s got so much confidence and I think the team will pick him up. We pushed him a little bit on back-to-back days, but he wants the ball and I like that.”

In order to secure a spot in the conference tournament final on Sunday, Texas would have needed to beat No. 4-seed Oklahoma State in two consecutive games Saturday. While the team wasn’t able to claw their way back to the championship game, redshirt junior infielder Zach Zubia said he was proud of the fight his team displayed. The Longhorns won two games in the loser’s bracket of the tournament after dropping their first game against No. 8-seed West Virginia on Wednesday night.

“I’m proud of how this team was resilient throughout the whole week,” Zubia said. “We saw good stuff all week. We couldn’t pull it out there in the end.”

The Longhorns just never looked comfortable at the plate and couldn’t string together enough hits when it mattered most.

Texas had an opportunity early in the third inning to put some runs on the board when redshirt senior catcher DJ Petrinsky led off with a single. With zero outs and a runner on first base, no Longhorn batter had the ability to advance Petrinsky. Two quick pop ups and a ground out ended the inning with a runner stranded.

For a team that has struggled throughout the conference tournament to consistently get hits, Pierce is ready to get back to work with his team to have them focus on the fundamentals.

“We need to get the ball in the line in the middle of the field,” Pierce said. “It sounds pretty simple but (we) need to see the ball better. Sometimes we see guys jump or get a little antsy. I think that’s when their swing breaks down and they have to learn from that.”

“I think this was the perfect thing we needed as a team,” Zubia said. “I think it was a good atmosphere and a great prep for the regional coming up next week.”