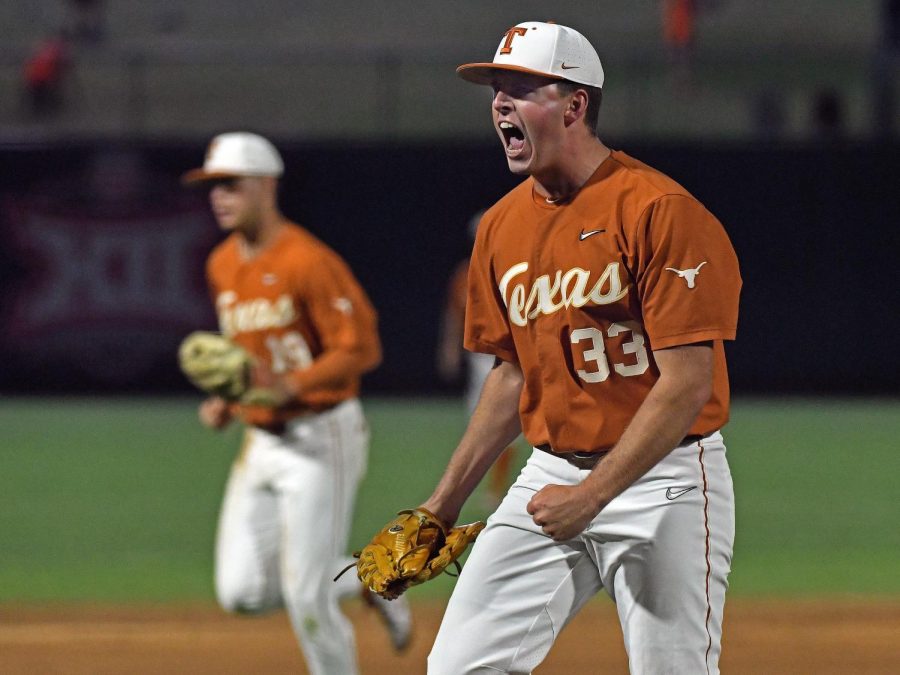 In the top of the ninth inning, as the Longhorns tried to hold onto a one run lead, head coach David Pierce put his faith in freshman pitcher Tanner Witt. Throughout the season, Pierce has turned to Witt as a relief pitcher but has rarely used him as a closer.

After the first batter grounded out, Witt seemingly struck out the second batter with a devastating 2-2 curveball. But the umpire called it a ball, giving the batter a walk one pitch later and putting the game tying run on first base. Instead of losing his composure, Witt came back and struck out a batter, but not before the runner managed to steal his way to third base.

With the eyes of the entire Big 12 on the No. 1-seed Longhorns in a win-or-go-home game Friday, Witt sent a 94 mph fastball high in the zone as the final Mountaineer batter struck out swinging.

After losing to West Virginia during their first game of the Big 12 conference tournament, Texas bounced back and relied heavily on stellar pitching to secure a 3-2 victory.

Witt showed off his composure and resiliency as he managed to not get overwhelmed in the intense moment, Pierce said.

“(Witt’s) tough. He’s got ice in his veins,” Pierce said. “If he gives one up, you won’t notice any difference. He’ll be right back out there giving his team a chance. (I) love what he brings to this team.”

Redshirt freshman pitcher Pete Hansen got the start for Texas and did everything he could to keep an explosive Mountaineer offense dormant. Although Hansen had himself a career night with nine strikeouts, he faced adversity at times throughout the game.

After a single and an error allowed runners on first and second base, Hansen had to shut the door on any opportunity for West Virginia to capture any early runs. Instead of losing his focus, Hansen locked in on the strike zone and framed a fastball that left the batter motionless ending the inning and keeping a zero on the scoreboard.

“Pete’s (Hansen) the man,” redshirt freshman catcher Silas Ardoin said. “He works hard (and) puts in a lot of time. We know every time he comes out there he’s going to give us his best stuff. Today he was really sharp.”

Hansen and Witt had themselves a spectacular outing as they limited the Mountaineer offense to only six hits. Not only did tonight’s pitchers receive praise from Pierce, but so did the entire bullpen for their continued excellence.

“(I’m) really pleased with the consistency of our starters and our young bullpen.” Pierce said.

When asked how the team is going to manage such a quick turnaround, Ardoin said that everyone is going to be locked in and ready to go Saturday afternoon.

“First, we got to go home, hydrate and get some rest,” Ardoin said. “We’re going to wake up tomorrow ready to play. (It) doesn’t matter if we’re tired or not.”