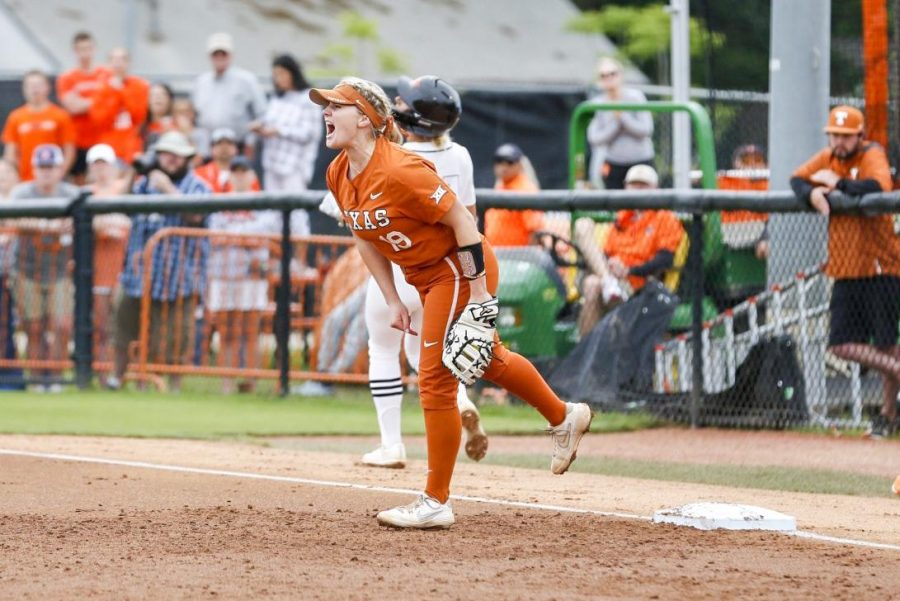 After forcing a tiebreaker game in the NCAA Stillwater Super Regional with a comeback victory over Oklahoma State on Saturday, the Texas softball team failed to repeat its heroics against its conference rival Sunday.

The 2-0 loss sent the Longhorns back home just one win shy of earning a spot among the eight teams that will compete in the NCAA Women’s College World Series.

The burden of the season ending loss laid heavy on the Longhorns’ shoulders. For the team, it marked the last contest of the season. For some of the players, it was the last Texas softball game of their careers.

After the game, leadership from Texas softball took a moment to reflect upon the team’s success in spite of the myriad challenges they faced in a season upended by the events of the past year.

“It was pretty hard from a team-building perspective to be able to do certain things — to get to know each other,” head coach Mike White said. “We had the loss of (pitcher) Miranda Eilish to deal with at the beginning of the season, which was … tough and put a lot of pressure on Shea (O’Leary) and Molly (Jacobsen) and the rest of the pitching staff.”

Those obstacles were just the tip of the iceberg for the Longhorns. A historic winter freeze canceled the team’s first ten matches of the season. The global pandemic redefined the interactions players on the team had with each other. Certain facilities were restricted with limited capacities, while others were closed off to fans entirely. When players traveled together, they weren’t even allowed to room with each other.

“I mean, it’s been a hell of a year, honestly,” Texas ace pitcher Shea O’Leary said. “So I think for us to make it this far has just been tremendous. I love this team so much and it’s been a lot of fun. … I’m proud of this team and I’m proud of what we accomplished this year.”

Rather than feeling only defeat from their loss, the Longhorns will use their emotions from today’s game to channel their focus forward into the next season.

“I think (this loss) will really help us in the future,” O’Leary said. “We’re gonna learn from our past experiences throughout this entire year. I think losing to OSU again is just gonna fuel us even more for next year.”

White, who now has a 113—34 record at The University of Texas, looked toward his incoming recruits and his team’s work ethic as a foundation to continue his success at the helm of the program.

“I think when you look back on it, it’s very tough in this moment not to be disappointed (when) you know you’re so close,” White said. “But I think that what you have to look at is effort (and) attitude. Did we build? Did we get better from the start to the end? And I think we did,” White said.