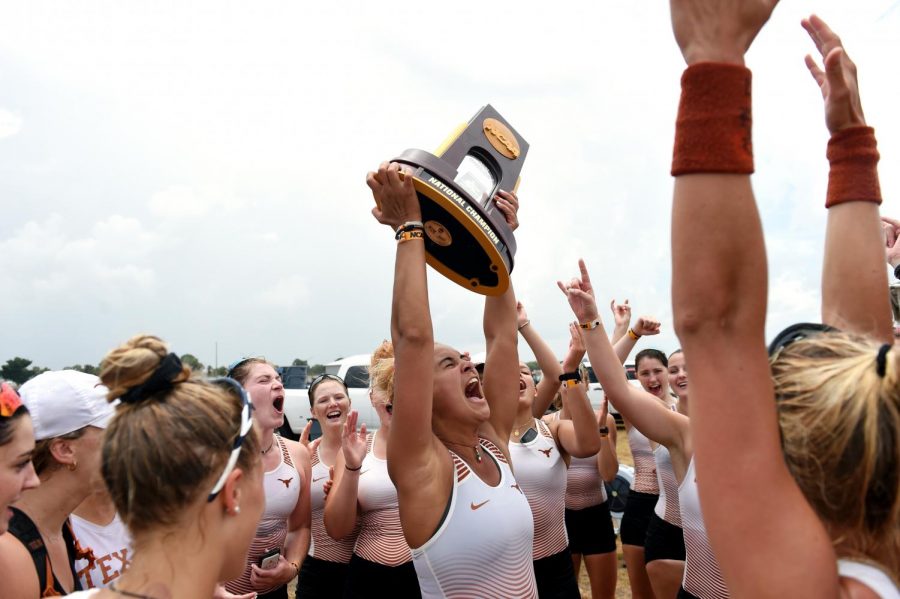 The Texas rowing team was lifted from club to varsity status in 1997 and did not compete in the Big 12 until 2009. Just over a decade later, the Longhorns overcame a two-hour delay and a final-race deficit to capture the program’s first ever national championship.

The gap between Texas and first place was 60 points heading into the final race of the Memorial Day meet in Sarasota, Florida. Texas needed a victory in the I Eight race for a chance at the title. The Longhorns broke ahead in the final 500 meters and crossed the finish line with a time of 6:17.387, out-pacing Stanford and Washington, who finished in 2nd and 3rd place with times of 6:18.891 and 6:21.715.

Head coach Dave O’Neill knew the importance of the final I Eight race, but chose not to remind his team what was at stake beforehand.

“There was no shortage of drama in the last race,” O’Neill said. “I knew things had to align perfectly for us to win, but I made a conscious decision not to tell the first eight what was at stake. I figured it was best to let them go out and do their thing, and that’s exactly what they did.”

O’Neill’s hiring in 2014 indicated a massive change for the Texas rowing program. He was a 2-time NCAA champion at the University of California but decided to come to Austin with the vision of turning the Longhorns into a perennial powerhouse. Texas gave O’Neill every resource available, allowing him to use the maximum amount of 20 scholarships to build up the program.

O’Neill felt these Longhorn rowers performed quite well despite them not winning their events.

“The II Eight and Fours (teams) raced their hearts out and put us in a position to win it,” O’Neill said. “Admittedly, they were a little disappointed with the result, but we are all proud of their efforts.”

The Florida weather provided a little surprise as lightning strikes forced a two-hour delay. O’Neill considered the break a blessing in disguise as his team thrives in situations of adversity and chaos, he said.

“I think the delay today worked in our favor a little in a couple of ways,” O’Neill said. “First, our team always seems to rally when there’s some sort of chaos. Also, the support and send-off by the entire team were electric. It was one of the more amazing moments of team spirit I’ve been a part of.”

Since Stanford, Texas and Washington all finished the weekend tied with 126 points, the I Eight results determined the tie breaker, winning Texas the national championship. Michigan finished in fourth place with 108 points.