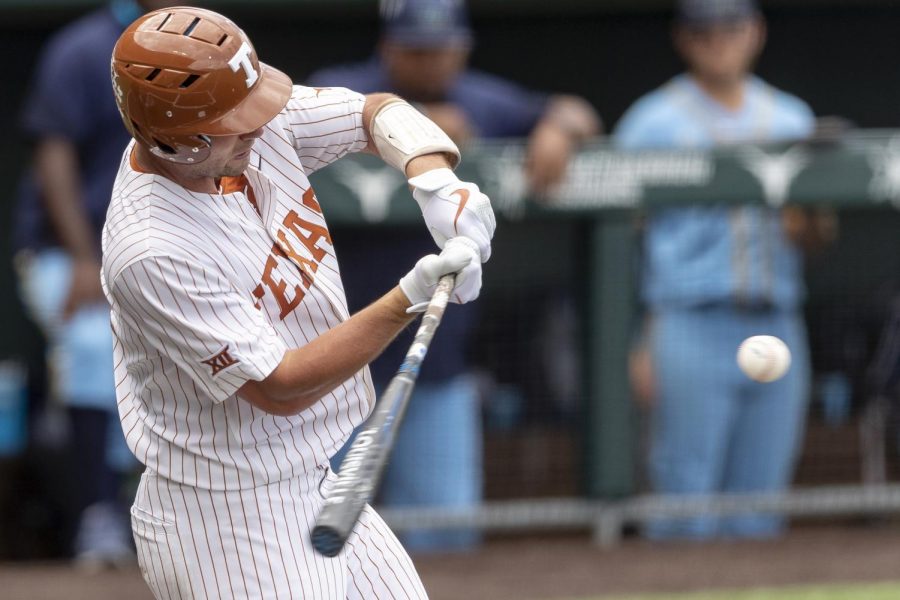 Ivan Melendez wasn’t in the starting lineup for Texas’ final game of the Big 12 Tournament, with head coach David Pierce citing his need for a mental break. But in the first inning of the Longhorns’ game against Southern University, Melendez proved he was mentally locked in.

The redshirt sophomore infielder stayed patient at the plate and blasted a ball to deep left field for a home run, and the Longhorns never looked back. Texas defeated the Jaguars 11-0 on the opening day of the Austin Regional.

For a batter that was chasing NCAA Division I baseball history during the regular season, Pierce applauded Melendez for staying focused.

“It’s all about confidence,” Pierce said. “I think Ivan (Melendez) is going to have a great weekend (and) potentially be good the rest of the postseason if he stays confident.”

During the Big 12 Conference Tournament, Texas struggled at times to bring runners across home plate. It was something that the coaches and players harped on in practice leading up to the ballgame.

“We know what this offense is capable of, and we know that they got into that little slump last weekend,” redshirt junior pitcher Tristan Stevens said.

The Longhorns not only got the job done with home runs, but also managed to utilize their speed running the bases.

With a runner on first base and no outs in the third inning, redshirt freshman outfielder Douglas Hodo III laid a bunt down to advance the runner. Hodo was too quick for the Jaguars, beating the throw to first base. Fellow redshirt freshman infielder Trey Faltine took notice of the hole in Southern’s defense and he too put a bunt in play, which allowed Texas to load the bases and ultimately score one run.

“It was nice to see (the offense) not only get those hits but execute the short game as well,” Stevens said. “We got a couple of bunts down and that was really encouraging because we do have that speed to put that pressure on the defense.”

Stevens proved that Pierce’s trust to give him the starting nod on opening day of the Austin Regional was warranted. The redshirt junior displayed clinical control on the mound and gave up only three hits through seven innings of work.

“I thought he did a nice job of being Tristan Stevens and attacking the strike zone,” Pierce said. “I think he trusts himself when it comes to preparation. He knows he puts the work in, and he depends on that.”

In their first postseason game since the 2018 season, Texas welcomed back Longhorn Nation with Disch-Falk Field operating at 100% capacity. Stevens and the entire team believe that it gave them a big boost as they hope to continue their dominance at home.

“Our motto is ‘Own the Disch,’ and I think we live by that,” Stevens said. “When we have the fans bring the energy that they do and when we do the preparation that we’ve done. We don’t think anyone can beat us here.”