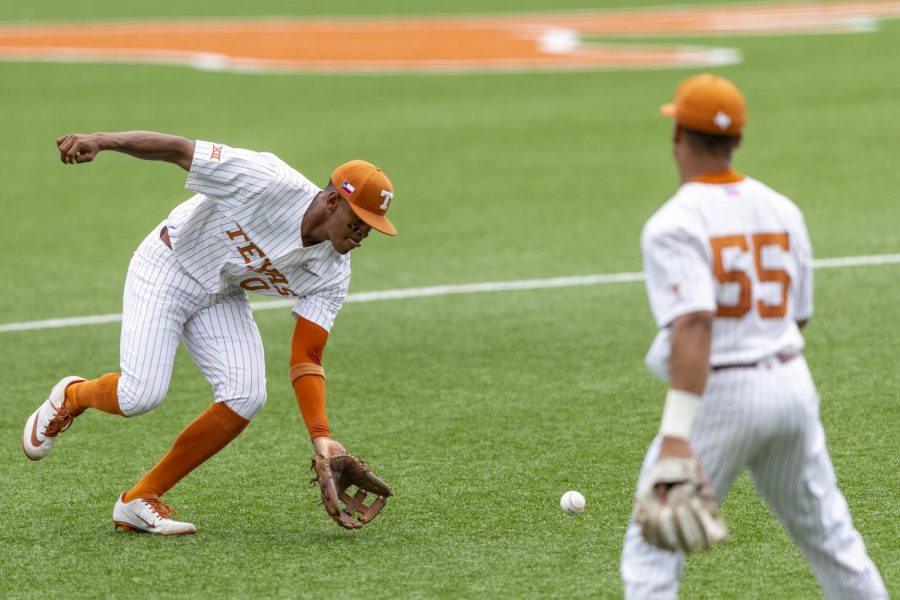 Cam Williams stepped up to the plate in the bottom of the third inning with the bases loaded and pressure falling on Arizona State pitcher Justin Fall to prevent Texas from getting on the scoreboard.

Williams, one of the Longhorns’ power hitters with 10 home runs on the year, didn’t get the chance to hit the ball, but he got the job done all the same. Fall plunked Texas’ redshirt junior with a fastball and allowed outfielder Mike Antico to advance to home plate.

The floodgates then opened as Fall started to lose his composure on the mound. He proceeded to walk the very next batter, which allowed redshirt junior infielder Zach Zubia to cross home plate. Fall tried his best to stop the bleeding, but instead threw a wild pitch right after the walk that brought another Longhorn run in the third inning.

When the third inning ended, Texas had scored three runs with little effort from their own batters as Arizona State’s pitching errors prevented any chance of an upset.

Trailing 8-1, the Sun Devils attempted to make a comeback in the seventh inning. Redshirt freshman infielder Nate Baez hit a two-run homer to left-center field, but it was too little, too late.

In the very next inning, redshirt freshman catcher Silas Ardoin hit a single down the middle of the field to bring home two more runs for the Longhorns. Ardoin’s hit put the nail in the coffin as Texas defeated Arizona State 10-3.

“I think we were able to slow the game down a little bit,” Zubia said. “To get into an environment like this, we got our feet wet a little in the first three, and once the offense settled in we were just rolling. It was nice to see the offense step up.”

The Longhorns got a big game from redshirt sophomore pitcher Ty Madden, who ended the night with seven strikeouts and just one run allowed on three hits. Madden said he brushed off all the negative energy from losing his previous two starts before Saturday night by sticking to the foundation he built all season.

“I just stick to my routine,” Madden said about his past few performances. “I definitely have things to work on, so I’m just viewing my last few outings and sticking to what I do.”

Texas also received some great performances from their batting crew. Williams ignited the rest of the team with a whopping three hits that turned into two runs for the Longhorns. Zubia drew a walk early in the third inning which he then turned into a score to help Texas pull away. He also bombed a two-run homer in the fourth inning which gave the Longhorns a 5-0 lead on the Sun Devils.

Texas has now steamrolled through the first two games of the regional tournament, and it looks to continue dominating in the regional championship game Sunday night against the winner of the Arizona State vs. Fairfield.