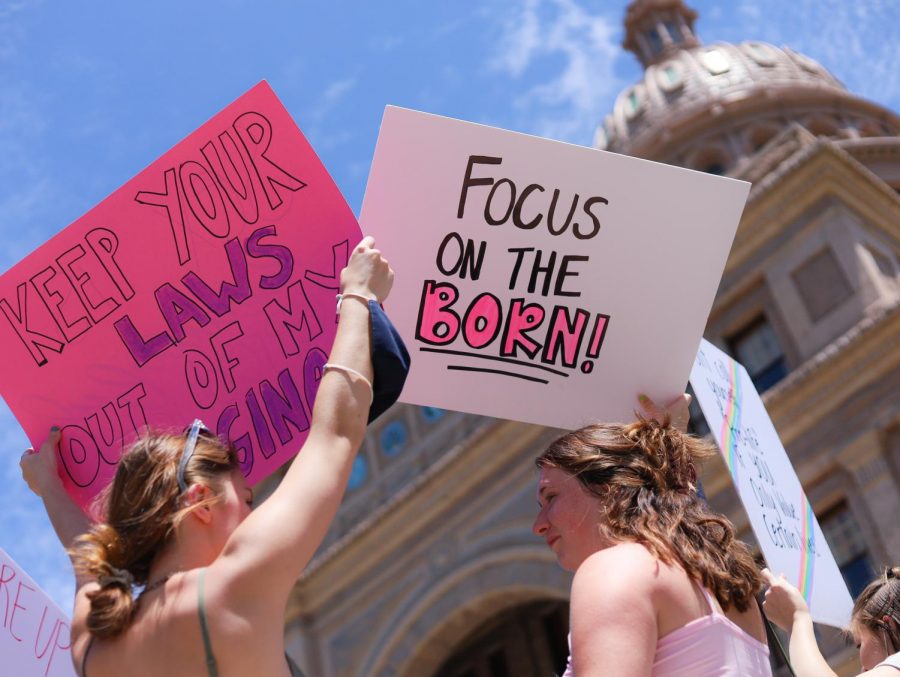 Saturday’s protest on the steps of the Texas Capitol saw hundreds of students advocating for reproductive rights in the wake of recent anti-abortion legislation in Texas.

On May 16, Gov. Greg Abbott signed into law Senate Bill 8, also known as the “heartbeat bill.” Mostly sponsored and signed by Republican lawmakers, the bill bans abortions as early as six weeks into pregnancy and prohibits physicians from performing abortions after a fetal heartbeat is detected. While the new law allows for abortion in cases of medical emergency, it does not provide exceptions for pregnancies resulting from rape or incest.

The state will not enforce the bill, which takes effect Sept. 1, but instead allows private citizens to take legal action against abortion providers.

Abbott thanked those who worked toward passing the bill during the signing ceremony last month with lead authors Sen. Bryan Hughes and State Rep. Shelby Slawson.

“They worked together on a bipartisan basis to pass a bill that I’m about to sign that ensures that the life of every unborn child who has a heartbeat will be saved from the ravages of abortion,” Abbott said.

Astronomy senior Kate Colston attended the protest and said she was surprised the legislature did not prioritize other pressing matters such as affordable housing.

“It just seems like performative politics, like it’s a fear mongering bill,” Colston said. “I guess I was just really surprised that this was the priority given the very real issues that everyone in Texas has dealt with.”

Colston said restrictive legislation like Senate Bill 8 could cause people to die from complications caused by self-induced abortions.

“The concept of abortion is not new, and it’s not something that’s ever been uncommon, but restricting it like this means that it absolutely will be unsafe,” Colston said. “One of the biggest points that a lot of the speakers made (at the protest) was that abortion is health care. A healthy and safe one can make the world of a difference.”

Civil engineering senior Tabby Farr said the language of the bill seems flawed because it is not backed by solid scientific evidence.

“I just think that the biology behind it is silly and also just how restrictive it is is absolutely insane,” Farr said. “Not only will it set a bad precedent for other states and other legislation in the future, I think that it will be devastating.”

The bill said a fetal heartbeat should be detected as soon as the heart is formed, typically after a six-week period. However, Dr. Lauren Thaxton, obstetrician-gynecologist and assistant professor in the Dell Medical School, said there are problems in the bill’s utilization of a heartbeat as the cutoff for abortions.

“The presence of a heartbeat presents an arbitrary cutoff,” Thaxton said. “It is so early in a pregnancy that many patients may not even know they are pregnant. This bill interferes with our ability as clinicians to provide high quality, evidence based medical care. It does not represent any medical relevance and presents a barrier to appropriate health care.”