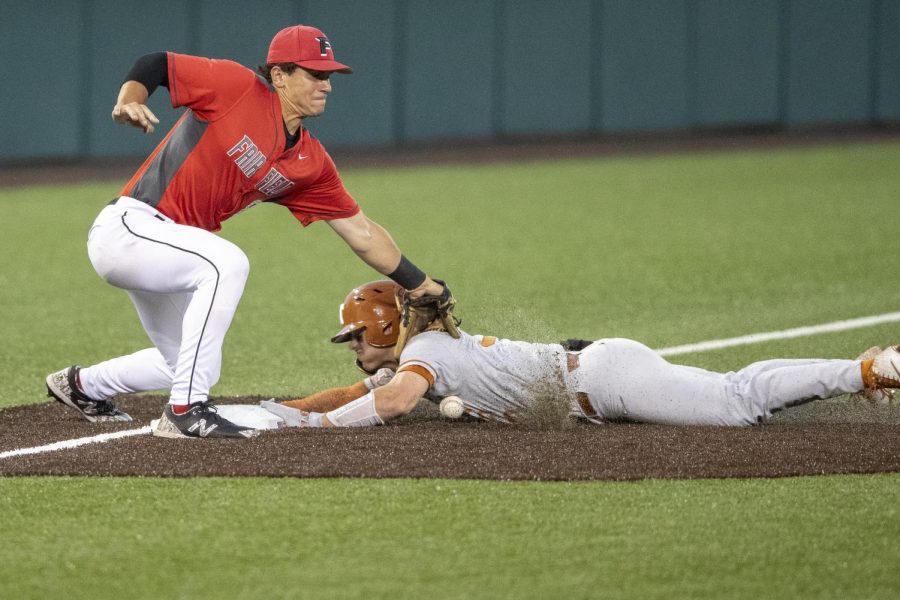 Pete Hansen set the tone for the entire game in the first inning of the NCAA Austin Regional Championship on Sunday night.

Up 1-2 on the count, the redshirt freshman pitcher gunned a fastball at Fairfield’s batter, who whiffed on the pitch and struck out. The rest of the night brought more of the same for Fairfield, as the Longhorns defeated the Stags 12-2 behind a record-setting night from Hansen that featured 13 strikeouts. Texas now advances to the Super Regionals after three-straight blowout victories in the Austin Regional.

Texas head coach David Pierce applauded Hansen for his incredible outing and for his confidence throughout 6.2 innings on the mound, especially with so much at stake. For the first time in his young career, Hansen got the opportunity to start a postseason game in front of 6,853 fans at UFCU Disch-Falk Field.

“That was a dominating performance,” Pierce said. “(Pete Hansen has) never pitched in a postseason game. (He’s) a COVID freshman, (but) he goes out and just dominates against a team that has had success.”

Playing in front of an energetic crowd was something Hansen had been looking forward to, but it meant even more after he was met with a standing ovation when he was relieved in the seventh frame.

“That was by far the coolest experience I have been a part of,” Hansen said. “Not even just walking off (after getting relieved), but seeing the Disch packed. It was electric yesterday, and I was very excited to see it today and pitch in it.”

Even though Hansen had one of the best outings yet, his control was tested in the third inning.

After getting off to yet another hot start in the frame by striking out the leadoff batter, Hansen allowed two doubles that gave the Stags their first run of the ballgame. Shortly after, a throwing error allowed a second run to cross the plate as Hansen found himself in an unusual situation.

Taking a moment to find his control and composure, Hansen stepped on the mound and captured the final two outs of the inning with a great arsenal of pitches. After Hansen was relieved of his pitching duties, three separate Longhorn pitchers closed out the game and secured the 12-2 victory.

Despite relinquishing control of the game after being relieved, Hansen said he trusts his teammates to get the job done whenever he heads for the dugout.

“It’s nice knowing that I have (relief pitchers) behind me and (the) same with the fielders,” Hansen said. “I have a lot of trust in the guys in that clubhouse. They’re just absolute studs (and) they get after it.”

Texas will now look forward to their first Super Regional appearance since 2018. As the postseason rolls on, Pierce can’t help but applaud his players for how far they have come this season.

“This team is unbelievable,” Pierce said “I get choked up about this team because they listen, they’re very coachable, they play for each other (and) they’re unselfish. I told them in the team meeting that they inspire me.”