Longhorns walk off against South Florida to open Super Regional 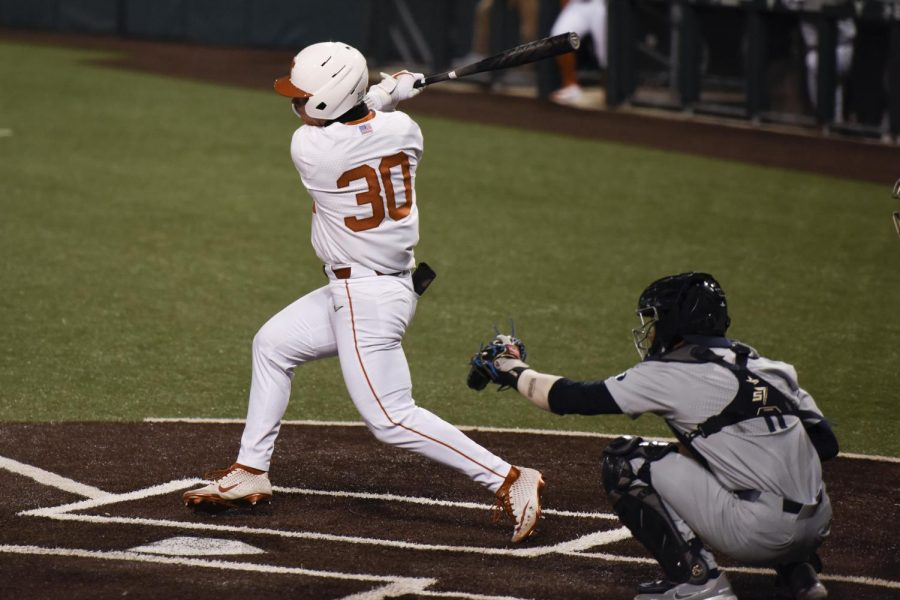 The raucous Longhorn fans at UFCU Disch-Falk Field went silent Saturday night when South Florida tied the opening game of the Austin Super Regional in the top of the ninth inning off a 2-run homer that came with two strikes and two outs. With the game suddenly tied 3-3, it didn’t take long for the Longhorns to respond.

In the bottom of the ninth, the first two Texas batters failed to reach base before a South Florida error allowed redshirt freshman catcher Silas Ardoin to reach base safely.

With the winning run on first base, redshirt sophomore outfielder Eric Kennedy stepped up to the plate for the biggest at bat of his career. Kennedy smashed the first pitch he saw over the center fielder’s head, allowing Ardoin to come charging around the diamond from first base and lifting the Longhorns to a 4-3 victory.

“I couldn’t be more proud of our team,” head coach David Pierce said. “You’re talking about kind of getting popped in the mouth in the ninth, they get the momentum. We weren’t perfect in the end, we never are but that’s what we strive for.”

Kennedy said he dreamed of moments like tonight as a kid, relishing in the moment as he stepped up to the plate with a chance to win the game.

“This is the reason you play college baseball, for experiences and moments like this,” Kennedy said. “This is the kind of moment you dream of as a little kid. As I was walking up to the plate I was like, ‘You were born for this, this is what you’re made for.’”

Redshirt sophomore pitcher Ty Madden got the start for Texas and displayed why he was named Big 12 Pitcher of the Year. Madden gave up just three hits and recorded nine strikeouts across six and two-thirds innings pitched.

Madden was relieved in the seventh inning to a standing ovation from the Longhorn faithful in what was likely his last appearance in front of the home crowd. With the dominant pitcher likely turning professional after this season, Madden said that the special moment will be with him throughout the rest of his life.

“It was special, you know, it’s been a crazy three years,” Madden said. “I think people have definitely seen the lows and the highs. It’s something I’ll remember for the rest of my life.”

The Longhorns are now one win away from punching their ticket to the team’s 37th College World Series appearance as they look to send the Bulls back to Florida.

Instead of looking ahead, Pierce said he wants his team to stay focused and continue to do what they have done all year, play ball.

“We have to make sure that we put our head down and realize that we’re going to have a dog fight tomorrow,” Pierce said. “We can’t think ahead and go ‘All we have to do is win one game’ because that’s the kiss of death. What we have to do is come to the park (and) put our work in.”