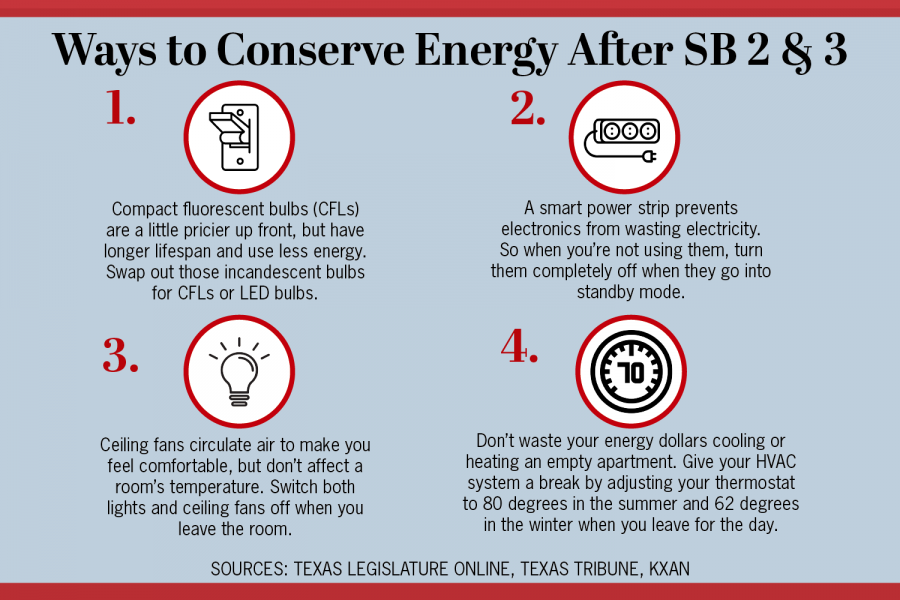 In efforts to stabilize the energy market, SB 3 will allow companies to seek state-approved bonds to cover financial losses. However, this comes at the expense of consumers whose utility bills will likely see extra charges as a result. Companies will be required to upgrade their power plants by 2022, and should their equipment fail inspections, they will be fined up to $1 million, according to The Texas Tribune.

Joshua Rhodes, a mechanical engineering research associate, said any time supply cannot meet demand, there is always a chance of outages because companies are forced to reduce demand, resulting in blackouts.

“Natural gas was extremely expensive during (the winter storm) as well as electricity, which normally is around $30 a megawatt an hour and was $9,000 a megawatt an hour for five days straight,” Rhodes said. “The people who buy the electricity in the wholesale market, like the retail electric providers or the co-ops or others, haven’t paid all of their bills yet because they either filed for bankruptcy or they’re just claiming that they shouldn’t have to.”

Robert Hebner, director of the UT Center of Electromechanics, said winterization will be an ongoing process that will need to be continually upgraded given the way our power grid evolves over time.

“Winterizing something like the power grid is a process, not an event,” Hebner said.

Hebner also said that despite recent issues, our power grid is mostly reliable and has been for several years now. However, consumers paying more for electricity becomes a question of equity for the Legislature.

“We work really well in the average extremes, and it’s always a question of how much you want to pay for,” Hebner said. “We could have power all the time forever if we’re willing to pay significantly more for our power bills. But If I need higher reliability, and I convince the state to pay for higher reliability, people who are a lot poorer than I am pay a larger fraction of their income for energy.”

Last week, ERCOT advised consumers to conserve energy this summer as near record demand for electricity could lead to more outages.

“It’s going to get hotter this summer and demand will be higher,” Rhodes said. “If we continue to have outages, it’s not guaranteed that the lights will go out, but it is a possibility. We don’t design systems to be 100% failsafe because they would just cost more money than we’re typically willing to pay, so there is some level of risk.”

Government senior Annie Vo said she practices energy conservation at home by setting her thermostat between 74-78 degrees and turning it off when she leaves, but if her utility bills were to be affected by this legislation, she would seek more affordable living elsewhere.

“Higher utility bills would definitely play a factor into how I pick my next apartment,” Vo said. “I would want a place that has utilities included instead of paying separate bills for my rent and my utilities.”