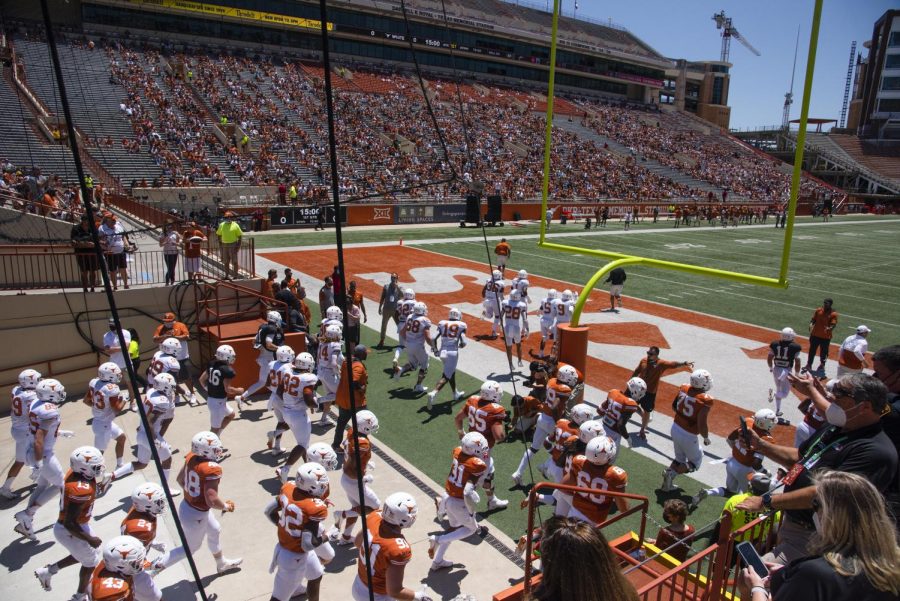 This article originally had the Student Body V.P.’s last name incorrect. It has since been corrected and the Texan regrets this error.

The University has made significant progress in the past year responding to the demands of its football team for a more diverse and welcoming campus, but many requests were either categorically denied or are suffering from slow implementation.

While the topic that has garnered the most coverage over the past year is the school’s decision to keep “The Eyes of Texas” as the alma mater after appointing a committee to examine the history and context of the song, there have been several key developments in other areas of the athletes’ requests. UT renamed the Physics, Math and Astronomy Building, erected a statue of Julius Whittier — the first Black letterman on the Texas football team — and changed the name of Joe Jamail Field to Campbell-Williams Field after the University’s two Heisman Trophy winners. The University has added required educational modules with information from The Eyes of Texas History Committee report, wrote Katie Sullivan, UT’s manager of communications, in an email.

The changes didn’t come just as a result of the football team, however. Logan Eggleston, a junior outside hitter on the volleyball team and the 2021 Big 12 Player of the Year, served on The Eyes of Texas committee and also helped write the script for the team’s Black Lives Matter video, which was published on the Texas volleyball Twitter account.

“I am extremely proud of the way the Texas athletes used their voices and platforms last summer to bring attention to issues they saw and to provide ways to make our campus a better, more inclusive place,” Eggleston wrote in an email. “The list of demands was the first major step in the change happening on campus.”

Many of the projects the University agreed to take on are still in the implementation process. University spokesperson J.B. Bird, through emailed correspondence with the Texan, wrote that the Heman M. Sweatt statue at the entrance of T.S. Painter Hall will take about two to five years to complete as administration listens to input from all the key stakeholders. UT is also working on several statutes honoring the first Black undergraduates on the East Mall of campus, although an exact timeline was not provided.

There are some areas where the University has not granted the requests of their athletes. “The Eyes of Texas,” as previously mentioned, is still the alma mater, while Painter Hall, the Littlefield monuments and Hogg Memorial Auditorium were not renamed. Texas Athletics is also not planning on donating 0.5% of their annual earnings to the Black Lives Matter movement, as originally requested, but Texas athletics director Chris Del Conte said the University plans to financially aid “worthy university programs.”

“There also will be a multimillion-dollar commitment from athletics revenue to worthy university programs that work to recruit, attract, retain and support Black students,” Del Conte said in emailed correspondence with the Texan.

After a year of seismic change at the University spurred by student-athletes, student body Vice President Ethan Jones said he wants to make sure UT doesn’t get bogged down by a checklist. Jones, who is from Minneapolis, said the flagship university needs to increase their outreach to underrepresented communities across Texas, as the athletes originally requested.

“I want to ensure that we’re looking into seeing how we can better underrepresented and marginalized students’ experiences,” Jones said. “It’s not just a bullet point, it’s not just a checklist. It’s ensuring that we’re attacking it from a multitude of different arenas, (ensuring) that we have increased investments and recruitment towards BIPOC communities in Texas.”