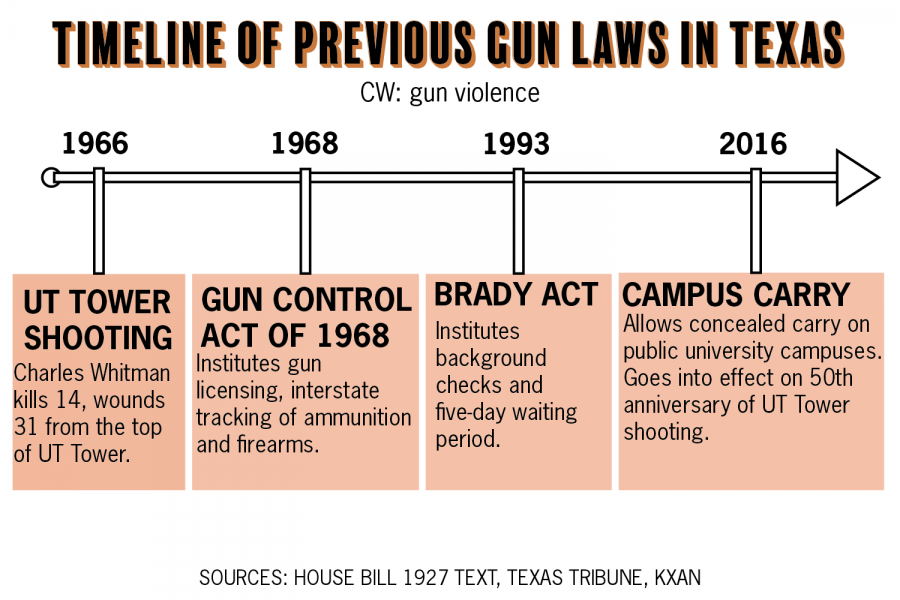 Also known as the “constitutional carry” law, the bill allows any individual over the age of 21 to carry a handgun, concealed or openly, without a license or permit as long as they do not have past criminal convictions or felonies. The bill goes into effect Sept. 1.

On June 12, a mass shooting occurred on Sixth Street in downtown Austin, injuring 15 bystanders, one of whom died the next day.

Marketing senior Sophia Scott was on Sixth Street with friends the night of the incident, when she was told to leave the bar she was at early. She said there were more police than normal outside, and described people as “frantic.”

“I just feel like there’s an obvious tie between gun violence and non-restrictive gun laws,” Scott said. “I don’t know why they’re giving people easier access to weapons when they can go and do things like this.”

Opponents of the bill say it perpetuates gun violence in Texas, and incidents like the one in Austin are more likely to occur with less restrictive gun measures.

Kevin Lawrence, executive director of the Texas Municipal Police Association, said with the passage of HB 1927, there is a high likelihood of repercussions for law enforcement.

“Our concern is that this change will make the jobs for our law enforcement officers more difficult and more dangerous,” Lawrence said.

Edwin Dorn, a professor in the LBJ School of Public Affairs, said the legislature is moving in the wrong direction by refusing to concede the relationship between guns and gun killings.

“Our preoccupation with guns is a distinctly American sickness,” Dorn said. “No other advanced industrial society believes that people ought to have virtually unlimited access to any kind of gun they want or that they ought to be able to carry it almost any place they want to carry. One result of that sickness is one of the highest gun fatality rates in the world.”

Dorn also said the bill will have detrimental effects on public safety, especially impacting students, faculty and other visitors on campus.

“What the legislature has done is make the state less safe,” Dorn said. “What we have right now is a situation in which you or I can stroll into a tailgate party during a fall football game, carrying a handgun, and blow away a dozen people before anybody can react. That is a frightening and stupid situation for legislature to have put us in.”

“APD and the City Council have initiated multiple violence prevention efforts in response- but this crisis requires a broader, coordinated response from all levels of government,” Adler said in the tweet.